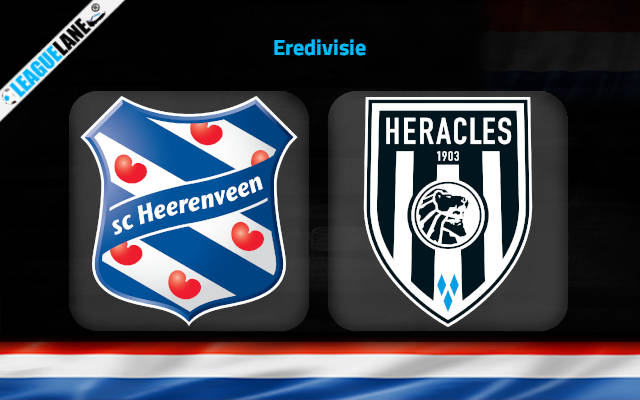 Heerenveen drew back to back league games after a dreadful run of 8 games ending in a defeat. They were unable to mark their first league win even after going 3 months into this new year. Heracles haven’t seen a win since the last 2 league schedules while they won and lost twice from the last 5 league fixtures. Sharing the same points and sitting one below the other, Heracles Almelo will be traveling to Abe Lenstra Stadion this Friday to cross swords with the Super Frisians for the 27th Round of Eredivisie.

The Super Frisians are at the 12th spot on the standing with 27points from 26 games. They won 7 times in the league while drawing on 6 and losing on 13 other occasions. They scored 22 in total while conceding a sum of 36 showing their far from perfect defense.

Heerenveen drew back to back league games against Willem II and Waalwijk, both ended with no goals from either sides. They netted up twice against the opposing sides over their previous 6 outings. In those meetings, they have also seen the tally of goals gone against them to be 8.

On the the flip side, Heracles resides just above them at the 11th position on the table with 27 points. Of the 26 matches played, they won 7 times in the league while drawing on 6 and losing on 13 other occasions.

In the game prior to this, the visitors undergone a goal-less tie in the Eredivisie division against Vitesse. During their 6 latest matches, Frank Wormuth’s Heracles have fired home a total of 5 times therefore giving them the goals per game average of 0.83.

Coming into this contest, Heerenveen are without a home win in the past 6 league games. But we predict a win for the hosts or a draw, as the visitors has never been able to secure a win on road even after playing 12 away games this season. They have also lost the last 3 away games on road in succession.