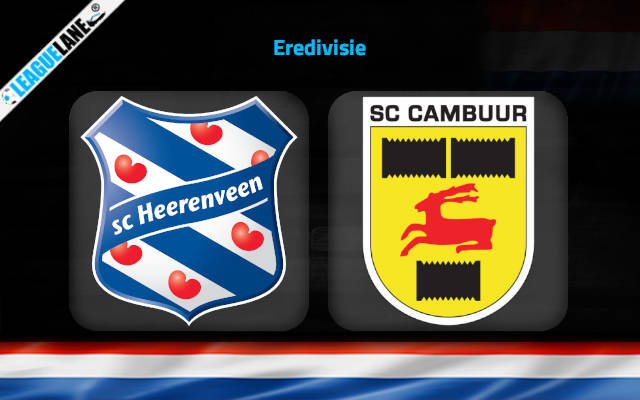 Heerenveen will have a nice chance to back up the last weekend’s win over Excelsior on Sunday afternoon when they host struggling Cambuur in the 14th round of Eredivisie.

The team from Abe Lenstra Stadion won two of the last three league matches to climb to the 8th place in the table.

They offered a strong defensive performance eight days ago against Excelsior, allowing them just one shot on target despite playing on the road.

The team led by Cornelis Kees van Wonderen have generally been tough to break down this season, allowing only 12 goals in 13 league outings since the beginning of the 2022/23 campaign.

To make things worse for Cambuur, they had a tough away fixture against Feyenoord (earlier postponement) on Thursday evening, meaning fatigue will also play a role for the visitors here.

Pascal Bosschaart’s men have failed to find the back of the net in four successive league outings going into this tie.

We also have to say that Cambuur did not look good defensively either last Friday when they lost 0-1 at home to NEC Nijmegen, allowing the counterparts as many as 23 attempts on the occasion.

Cambuur did not score a goal in four successive Eredivisie games and they looked terrible defensively in the home loss to NEC Nijmegen last Friday.

We fancy Heerenveen tow in both halves at the exciting 5.00 odds, while you can also try with the hosts to win to nil at the 3.50 odds knowing how strong defensively they have been in the last weekend’s victory.