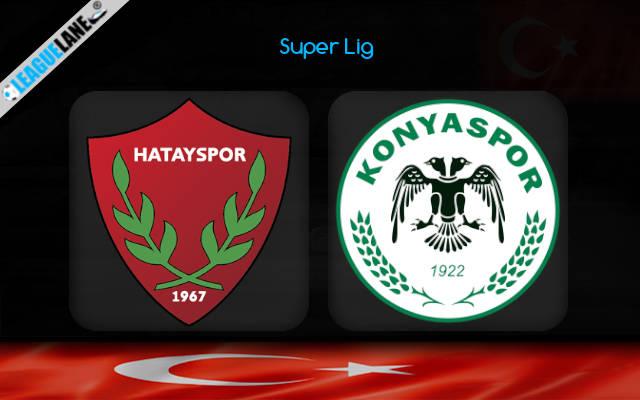 In game week 18 of Super Lig, Hatayspor faces Konyaspor for their next match this Wednesday at Hatay.
Hatayspor is in the fourth position on the league table with 29 points from 17 matches. They played their last match against Trabzonspor, where the opposition scored two goals against a goalless Hatayspor. The match ended with 0-2 FT score.

Konyaspor is second on the league table with 33 points from 17 matches. Their last match was against Antalyaspor in which Konyaspor scored a last-minute decider ending the match with 1-0 FT score.

Hatayspor has 9 wins, 2 draws and 6 wins from their leagues matches so far. The team has played well from the beginning of the season and has kept win-streak up to four matches in the tournament.

Even though their performance in the last matches says otherwise, they are a team who can play better at any moment of the tournament and give a difficult time for their opposition.

In their home matches, Hatayspor has won six of the matches and has scored in all the games except the last one. The team played their last home match against Istanbul Basaksehir. The match ended with 1-0 FT score where Hatayspor scored the one and only goal in the match.

Konyaspor has 9 wins, 6 draws and 2 wins from the 17 matches. The team has not lost their last three matches. From the last ten matches, the team has scored in eight of the matches and in five of the matches they have scored two or more goals.

After a couple of draws in the beginning of the season, the team is now looking to achieve as much wins as possible. They have won in six of their last ten matches.

Out of the nine away matches, Konyaspor has won three and drawn three. Their last home match was against Faith Karagumruk, where the opposition scored only a single goal against the four goals of Konyaspor. The match ended with 1-4 FT score.