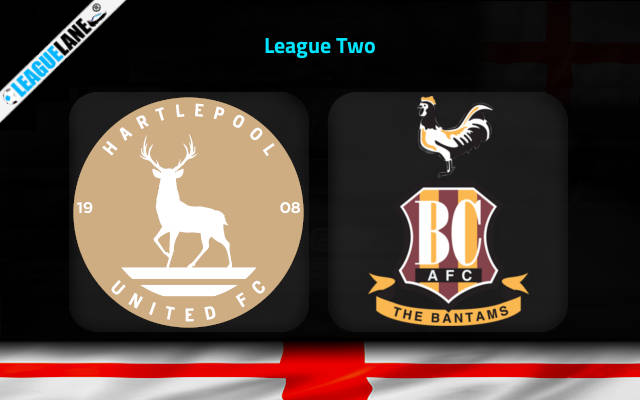 Following a mixed start to the campaign, Hartlepool United looked to have taken major steps early in the new year, as they enjoyed an 8-game league unbeaten run which included 4 wins. After their last loss, they are unbeaten since the last two league schedules. Bradford side are keen to climb back to the top end of mid-table after a dismal run of form, losing 5 games in a row which tiredly ended last week with a much awaited victory. Two sides separated by 5 points and 2 places in the the League Two table will clash at Victoria Park on Tuesday, as Hartlepool host the Bantams.

The hosts are at the 12th spot on the standing with 48 points from 35 games. They won and lost 13 times each while drawing on 9 other occasions. They scored 36 in total while conceding a sum of 44 which shows some improvement in defense is needed.

Hartlepool United prepare for this fixture after a goal-less League Two drawn game against Leyton Orient. They have been scored against on 5 of their previous 6 games, leaking 8 goals in the process.

On the other hand, Bradford resides at the 15th position on the table with 43 points. Of the 36 matches played, they won 10 games while drawing and losing on 13 fixtures each.

Bradford City go into this encounter following on from a 0-2 league win against Forest Green Rovers in their previous fixture. That has seen Hughes’s side move level with Harrogate Town and five points behind their hosts in the top half.

We envisage a win for homer team as they haven’t lost in the league to Bradford City in their previous 2 games and remain unbeaten in their last 8 league fixtures at home.