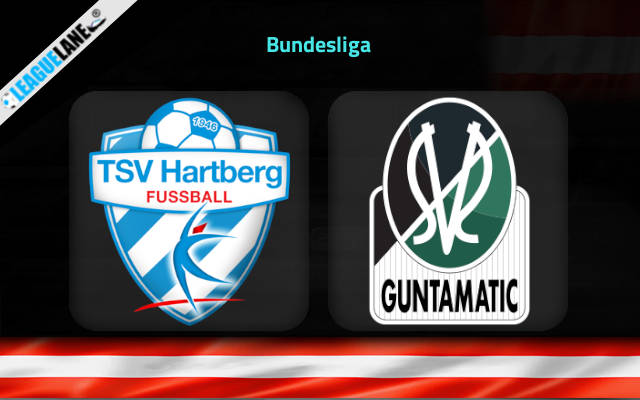 Round 32 of Bundesliga Relegation Group will start this week as the group leading Hartberg play host to Ried where both these sides are level on points. These two teams will battle it out at Stadion Hartberg, this Friday.

Ried is at the 9th spot on the standing with 21 points from 31 games. They won only 8 times in the league while drew on 12 and lost on 11 other occasions. The visitors have only a 2-point lead from the drop zone but it’s due to their better goal difference they remain at third.

In their previous fixture, Ried drew 1-1 in the Bundesliga tie with LASK. Their leaky defense have seen getting scored against in all of their last 6 games, with the opponents hitting 11 goals in total.

On the other hand, Hartberg resides just below them in the 10th position on the table with 21 points. Of the 31 matches played, they won only 7 times in the league while drew on 11 and lost on 13 other occasions. The visitors score goals but they tend to concede more of the same which hints that some defensive adjustments is needed.

Hartberg will be hoping to return to winning ways here following a 2-4 league loss in their previous game against Tirol. Over their past 6 games, the sum total of 23 goals have gone in for both sides combined with 13 of those being chalked up by the hosts.

This is a bit tricky game as both teams are two points ahead of last-placed Altach, with one game left to play. Considering Altach’s -26 goal difference, a draw is beneficial for both teams, as it would guarantee both teams’ safety.

Both teams have found the net in 5 of their last 7 h2h encounters. Three out of their last 5 h2hs have ended on a draw and even the visitors come here on the back of two ties.

Considering all these facts into account, we feel that a draw seems the likeliest option here.