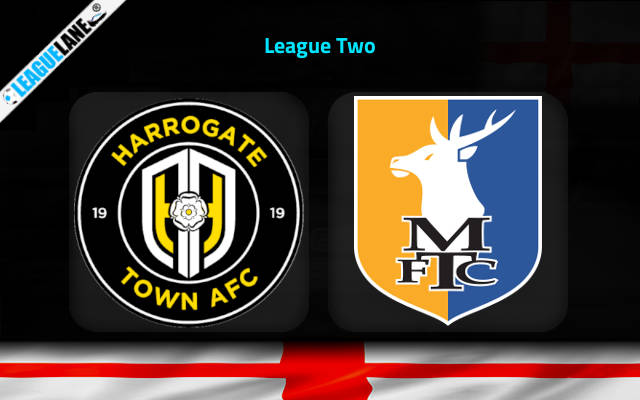 In game week 24 of League Two matches, Mansfield Town travels to Harrogate for their next match against Harrogate Town on Wednesday.

Harrogate Town is 11th on the league table with 30 points from 22 matches. They played their last match in EFL Trophy against Tranmere Rovers, which ended in a win for the team with 1-2 FT score.

They have 8 wins, 6 draws and 8 losses from the 22 matches. Harrogate is on a 4-game cold streak at the moment in their league matches. The team has only two wins from the last ten matches and has scored in seven of the matches.

The host has played 11 matches in their home ground. Even though they have scored in eight of their home matches, they have only three wins to show. They played their last home match against Northampton Town, which ended in a loss with 1-2 Ft score.

Mansfield Town is in the 9th position on the league table with 32 points from 22 matches. They played their last match against Hartlepool United, which ended in a win after the team scored three consecutive goals against the 2 goals of opposition.

Mansfield has 9 wins, 5 draws and 8 losses so far in their league matches. They are currently on a 4-game win streak and have seven wins from the last ten matches only. After a poor start in the beginning of the season, the team is securing wins now to move up the ladder. The team has also scored in nine of their last ten matches.

The team has played nine away matches so far. They have only two wins to show in their away matches. The team has also only scored in five of the away matches. Mansfield played their last away match against Crawley Town, which ended with a win for the team after they scored two goals against a single goal score opposition.

After a poor performance in the beginning of the season, Mansfield has picked up their form and playing well mow. Even though their away stats speak otherwise, the team is the best choice in the upcoming fixture. They have won in the last four games and have scored in nine of the last ten matches as well.

Harrogate is on a 4-game cold streak in their league matches. They have not won in the last five of their home matches and have not scored in two of the matches as well.