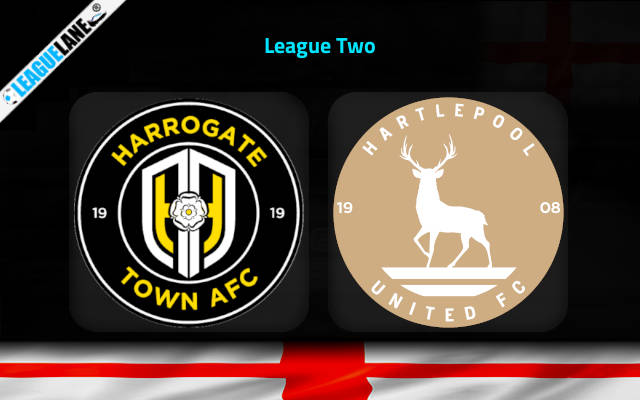 Game week 35 of League Two brings us the match between Harrogate and Hartlepool on Saturday at Harrogate.

Harrogate played their last match against Port Vale. Both teams scored a single goal against each other, ending the game in a draw with 1-1 FT score.

Hartlepool unbeaten streak came to an end with their loss in the last match against Walsall. Walsall scored three goals in the match while Hartlepool could score only one. The match ended with 3-1 FT score.

Harrogate has achieved mixed result in their league matches recently. Their inconsistency has affected their standing, placing the team 14th on the league table with 43 points. From the last ten matches, the team has scored in seven but could find wins in only three.

Hartlepool had an eight-game unbeaten streak which ended with their loss in the last match. The team’s improved performances in the recent matches have placed them 13th on the league table with 44 points.

Harrogate’s recent performance has shown improvement when compared with their performance at the end of the last year. Harrogate has scored most of their matches in the second half of the match and can be expected to score a goal in the second half of the match. Hartlepool has played well in their recent matches and has earned four wins in their last ten matches. They have performed better than the hosts in their recent matches.

Harrogate and Hartlepool have played well in their recent home and away matches, respectively. Both of them have scored well in their matches and have two wins, two draws and a loss in their last five matches.

The match will be a tight one because of the similar performance both teams have exhibited. However, Hartlepool is the better team of the two and has more chance in winning the match than Harrogate. Also, both teams have scored in their recent match and can be expected to score in this match as well, ending the match with over 2.5 goals.