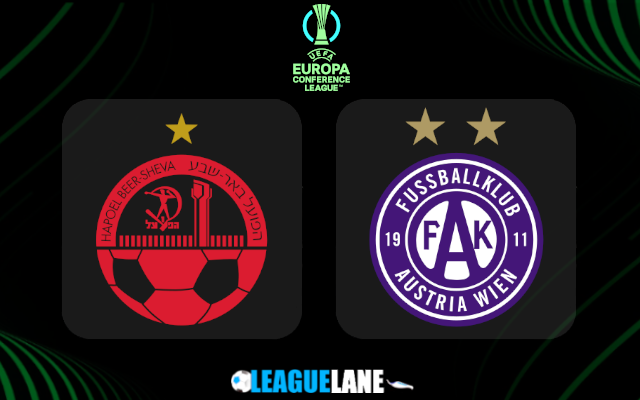 Neither Austria Vienna nor Hapoel Beer Sheva had a flying start to their new seasons as expected. Both the outfits will lock horns in a Europa Conference League fixture on Thursday at Toto Turner Stadium.

Austria Wien had finished third in the league standings the previous season in the Austrian top flight. And at present, they looks flat and are falling through the ranks of the league match by match.

Going on, the team were winless in five of the past six overall fixtures and had let in a total 11 goals over the course of the games. Their defensive line must need a repair.

Anyway, even if it is repaired, there is no chance for them to claim a safe zone. But that is not the case of Hapoel. If Lech loses their next game and Hapoel get a win, they can climb into the second spot.

Both these teams have not won a single game in this ECL season. But Hapoel lost only one game. They drew and earned four points in the rest of the matches.

Meanwhile, Austria drew two of their matches and lost the remaining three. They conceded 11 goals in five games played. A goalless draw in the reverse fixture will only be the relying factor for them ahead of this clash.

The Reds are unbeaten in the last 8 overall games. It also includes the draw in the last three games in the ECL. Barring the game against Austria, they managed to score goals in all other games.

They also managed to hold the current group leaders Villarreal to a 2-2 draw in their last ECL game. In this form, Hapoel’s chances of conceding a defeat is very little.

Moreover, they will enter with all the preparations for a win as this three pointer will help them clinch the safe zone.