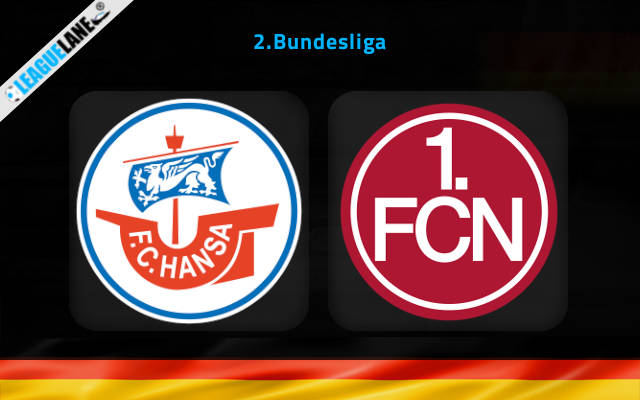 Rostock is at the brink of falling into the relegation zone after undergoing the last 2 games without a win. They share exactly the same points with Sandhausen and they are in dire need of a win. Nurnberg won the last league fixture even though they lost 3 of the past 5 league appearances. Hoping to gain momentum in the league they travel to Ostseestadion this weekend to face Hansa for the 24th Round of 2.Bundesliga.

The visitors are at the 7th spot on the standing with 36 points from 23 games. They won 10 times in the league while drawing on 6 and losing on 7 other occasions. They scored and conceded the same amount of 32 so far in the league.

Nuremberg will go into this meeting following a 2-0 league win against Regensburg in their most recent outing. Goals have been scored 20 times in the last 6 matches in which they have taken into the field, making it a mean average of 3.33 goals per fixture.

On the other hand, Hansa is at the 15th position on the table with only 25 points. Of the 23 matches played, they won only 6 games while drawing on 7and losing on 10 other occasions. Their total goals to conceding ratio stands at 27:36 displaying their weak defense.

Rostock had a 1-1 stalemate game against Darmstadt last week. They failed to prevent opponents from scoring in 5 of their previous 6 matches, giving up 7 goals in the process.

The visitors have not beaten Nuremberg in their previous 7 league matches and they haven’t won at home since the past 5 league schedules. We therefore feel that a victory for the visitors is up for cards this Saturday. Moreover the home performance of the hosts are poor winning only twice of the 11 games played at Ostseestadion.