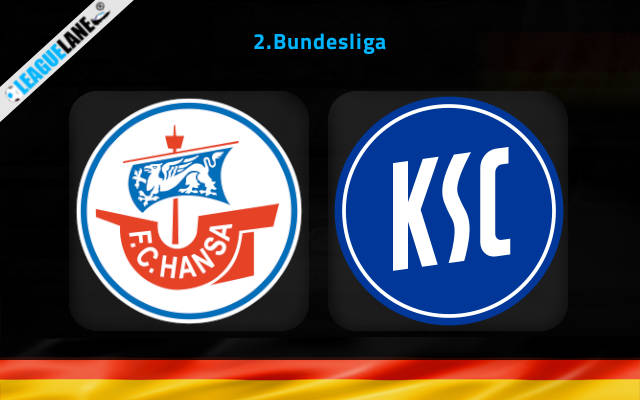 Hansa Rostock will celebrate the return to the second-class football in a festive atmosphere on Saturday afternoon when Karlsruher come to visit Orstseestadion in the opening round of the new 2. Bundesliga season.

The team from Rostock returned to 2nd Bundesliga after nine years of struggles in the lower division. They finally made it count by clinching the runners-up spot in the previous term of 3. Liga.

Jens Hartel’s men now want to stay in the second tier. We will be able to assess their capabilities only after the first several rounds.

Their newest arrival, Streli Mamba, stole the show by completing a brace on the occasion. We can’t wait to see Kairat Almaty’s loanee in action in the team’s maiden competitive game on Saturday. Their first rivals come in the likes of Karlsruher SC who were one of the most pleasant surprises of the previous term of 2. Bundesliga.

Despite budget limits (compared with some of the competition’s heavyweights), Karlsruher managed to clinch a top-six finish.

Christian Eichner’s troops have been especially dangerous on the road. They had a fantastic record of 9 wins, 4 draws, and just 4 defeats in 17 away matches in the previous term of 2. Bundesliga.

Karlsruher kept their net untouched in their final pre-season test last weekend against Saarbrucken (a 1-0 win). Despite Hansa’s fine attacking form in their friendlies this summer, we feel this match could be decided by just one (or even none) goal.

The recent head to head record speaks in the favor of this statement as well. This is why we see the Under 2.5 goals FT as the best betting pick for this game at the 2.00 odds. The braver punters can shoot straight for the draw at the 3.40 odds.