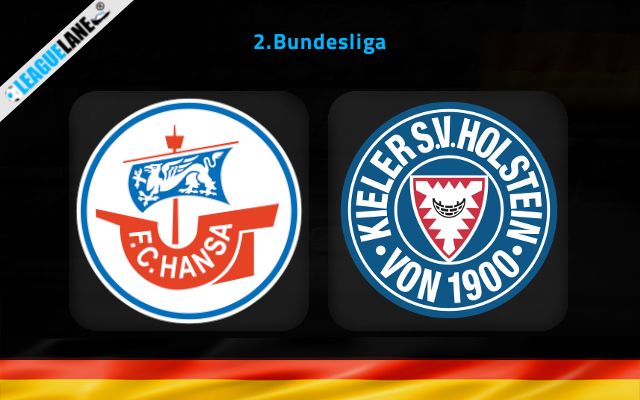 Hansa Rostock have a disappointing overall form this season. However, their recent form in the league looks better when considering their run in the whole league so far. They have collected 28 points in total. They are on the edge of the relegation picture.

They will be hoping to secure themselves in the table by converting their inconsistent form of late to a positive momentum. They have recorded a win in their most recent league fixture against Schalke away from home. They have also locked Darmstadt in a 1-1 draw two games ago.

Meanwhile, Holstein Kiel sits 11th on the table. They have an average defensive and offensive lineup. However, their form has been bit worrying of late. They dropped points in recent league outings.

They are on the back of three subsequent league defeats. Most recent of those recorded against Paderborn at home. They leaked 4 goals in that match while scoring 3.

By the look of things, we expect a good encounter between these two outfits when they meet at Ostseestadion on Friday evening in the 26th Round of Germany 2.Bundesliga fixtures.

Hansa Rostock are unbeaten in 5 of the past 10 home league fixtures. Their form at home doesn’t looks impressive. But they have been bettering themselves in the league of late.

Holstein Kiel have lost three in a row and follows such a set of negative results. One of those defeats were recorded on road against Hannover. They have leaked goals in each of their past 15 on road fixtures across all competitions.

Analyzing all the above stats, we are backing Hansa Rostock to seal a win in this fixture. We also back the both teams to score option.