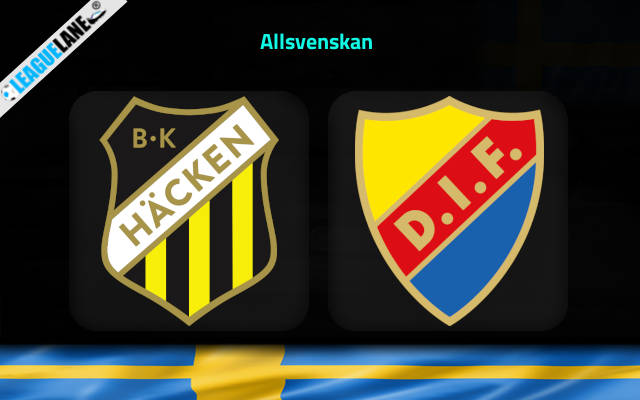 Gameweek 10 of Swedish Allsvenskan is set for this weekend as the table topper Hacken play host to the catching-up Djurgarden where both these sides differ by just a point. These two teams will be seen clashing at Bravida Arena, this Sunday.

Hacken is at top flight in Allsvenskan with 31 points from 14 games. They won 9 times in the league while drawing on 4 and losing only once. They have scored 32 goals in total while conceding a sum of only 19 which shows how profound their defense and offense lineups are.

The hosts will want a repeat of their previous result, being a 5-1 Allsvenskan win against Sundsvall. Looking at their last 6 games, Hacken have seen their goal breached in all of them in addition to managing to get on the scoresheet in 6 of those matches as well.

On the other hand, Djurgarden resides at the second spot on the table with 30 points. Of the 15 matches played, they won 9 timeswhile having drawn and lost 3 games each. They have the best goal ratio so far in the league with 33:10 indicating their talented squad.

The visitors enter into the match following on from a 2-1 Conference League qualifier win over Rijeka in their last match. Djurgarden have amassed a bagful of goals in their past 6 clashes that has earned them the impressive average of 3.17 goals scored per game.

Meanwhile, the hosts have not emerged victorious against this opposition in their previous 6 league matches. They have also lost their last 4 home h2hs in a row. It’s likely that Hacken will score today, as they have netted in the last 11 games coming into this one and have scored 12 goals in the last five games.

Since both are strong teams, expect a tight encounter with a draw or win for the visitors.