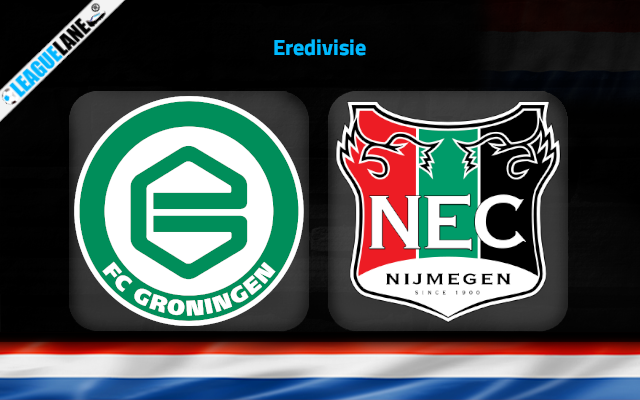 Groningen have been in fine form over the last few weeks. With such a run of games, they are looking likely to enter the top half of the table sooner rather than later. However, finishing in one of the Conference League playoffs looks unlikely as they are a far way away from the top seven positions.

They managed to hold 3rd place team Feyenoord to a 1-1 draw away from home on their previous matchday. The result marked the club’s 2nd draw in three league matches.

Managing to gain ten points from their previous five league matches, the club now sits 10th in the Eredivisie, a point behind their opponents for this weekend.

NEC have managed to pick up just a win this year. However, the club has managed to hold their own through draws and as a result are just about clinging on to the top half of the table. With that being said the club finished 7th in the second flight last season.

They were outclassed in their previous fixture at home by AZ, in a contest that ended with a score line of 1-3. The result marked back to back losses for the club. Following which they are now 9th in the league, nine points behind the 7th place team.

Despite struggling in recent home games, NEC peculiarly have been solid in away fixtures, having lost just once and been able to pick up ten points from their last five league matches on the road. Expect them to at least hold their own against a club that has lost twice at home already in 2022.

Nijmegen has scored the first goal in their preceding nine away fixtures in the league. Their opponents meanwhile have failed to do so in their last seven home league matches. Hence, expect the visitors to score the first goal.