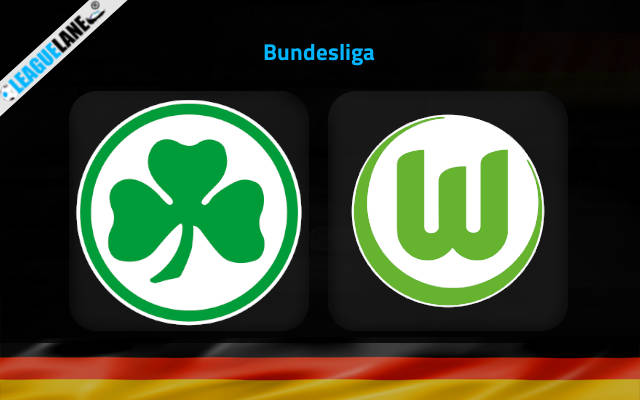 Wolfsburg made a solid start to the Bundesliga campaign and they will be aiming for the fourth win on the bounce against Greuther Furth on Saturday.

After a fourth placed finish last season, Wolfsburg were quick to transform the confidence and momentum into the new season and come to matchday 4 with a 100% win record.

The Wolves went into the international break on the back of a 1-0 win against RB Leipzig, a team that could challenge them for a Champions League spot. Meanwhile, the previous two wins came at Hertha Berlin 2-1 and Bochum 1-0.

It seems like Mark van Bommel’s men are aiming for another strong defensive display after conceding 1 goal from the first three games. This was their building block last season under Oliver Glasner who is now sitting at the dugout of Eintracht Frankfurt.

Furth has been far from impressive this far and are winless after 3 rounds of football.

Their life in Bundesliga started with a proper thrashing at Stuttgart (5-1), though some respect was restored with a 1-1 draw against Bielefelf before returning to losing path at Mainz (3-0).

This is an early warning for Stefan Leitl and his men, the team start the matchday 4 sitting in the relegation waters.

These teams rarely got the chance to lock horns in competitive football fixtures.

Overall 3 as far as we can find, and Wolfsburg are unbeaten with 2 wins and 1 draw.

This could be another excellent season for Wolfsburg since they wasted no time in adapting to Mark van Bommel and got off the block with 3 wins on the trot.

Their defense is playing a key role as in the previous season and we can expect them to win here without any trouble.

On the other hand, Furth are yet to adjust to the pace and intensity of the elite division and there are too many vulnerabilities in defense, having already conceded 10 goals in 3 games.