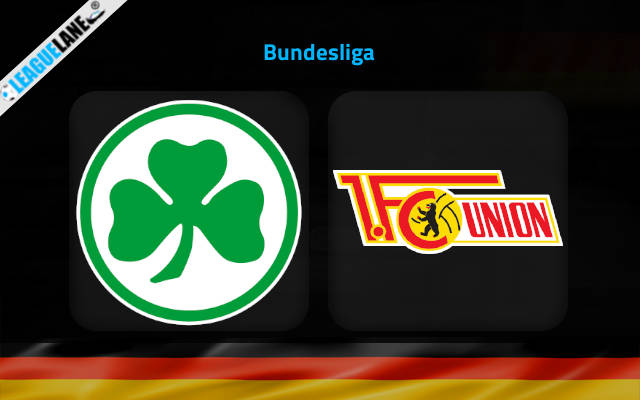 Union Berlin is in their third season back in the German top-flight. After a mid-table finish in the first season, they managed a Conference League spot in the preceding season. They are hoping to achieve greater things this time around.

The side will travel to Furth as they take on Greuther Furth at the Sportpark Ronhof this Sunday. The visitors should look at this fixture as 3 easy points up for the taking as the hosts have looked totally out of place in their first season back in the Bundesliga. Read our Preview, Predictions, and Betting Tips with Analysis here.

The Cloverleaves will go into the match with a 12 match losing streak. With just 1 draw to show for in this season, which came against Arminia on matchday 2, they are bottom of the league with 1 point.

The Iron Ones have lost just once in their last 6 matches. Having picked up 7 points in their last 5 league fixtures they are 6th in Bundesliga, 7 points behind Dortmund.

Firstly the away form of Union is in no way impressive having won just 1 match on the road in the league this season. Secondly, the most important factor to consider is the extremely poor season the hosts are having, be it at home or away. To sum it up I do not see Furth challenging for points in this fixture.

The defence of the home side is a shambles. They have conceded an eye-watering 46 goals already in the Bundesliga. The defence of the visitors is in no way perfect either having conceded the second most goals by any team within the top 8 in the table. With such poor defences involved do not expect a low scoring game.