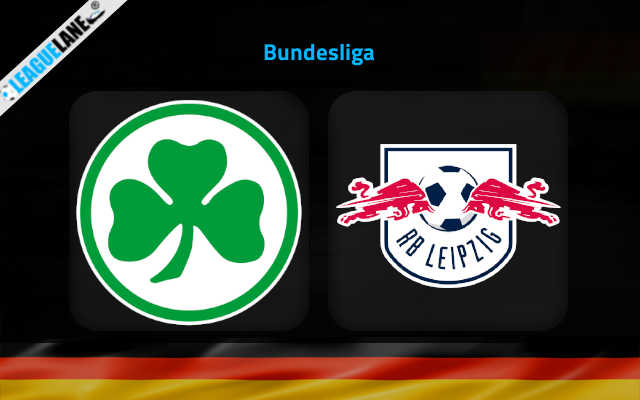 RB Leipzig halted their push for the top-four finish in this term of Bundesliga last weekend when they barely rescued a point in the home fixture against direct top-half rivals Freiburg.

Angelino bagged the late 90th-minute equalizer to prevent a defeat in what ended as a 1-1 draw at Red Bull Arena.

RB Leipzig fell to fifth place in the league table as a consequence. Domenico Tedesco’s men will, however, have a nice chance to immediately return to winning ways in the last fixture of Gameweek 26 on Sunday evening when they travel to Sportpark Ronhof Thomas Sommer to tackle the rock-bottomed Greuther Furth.

Furth will most likely play 2. Bundesliga football next season. They were by far the worst team in the elite tier of German football in the first half of the campaign.

The hosts found a way to improve their displays in the second half, but clearly lack quality to stay competitive against some of the top teams in the country.

The latest of Furth’s failures came eight days ago when they fell 2-1 away at Bochum, allowing as many as nine shots on target on the occasion.

We all know about immense talent RB Leipzig possess in their ranks, especially in the final third. This is why we have reason to be worried about Greuther Furth defensively here.

The gulf in quality between the two teams is significant. RB Leipzig can ill afford to drop the ball in the clash against the weakest side in the league.

We expect the visitors to confirm the favorites tag and dominate the pitch from the first to the final whistle on Sunday night.