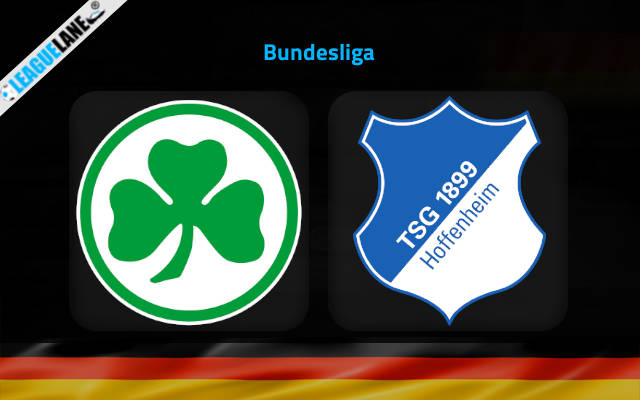 This should be a one-sided affair by everything we have seen so far in the season from these two sides. Hoffenheim have been amazing last weekend against RB Leipzig, while Greuther Furth once again suffered a horrendous defeat (4-0) at Borussia Monchengladbach. We can’t see anything else but a comprehensive away victory here.

Hoffenheim produced the best performance of the season last weekend in a 2-0 victory over RB Leipzig.

They controlled the game from the start to the end, allowing one of the most dangerous teams in the league register no more than four attempts in total (zero on target) on the occasion.

They, on the other side, had 24 shots (8 on target) and deservedly snatched an important home victory.

Although Sebastian Hoeness’ men sit at the 10th place in the Bundesliga standings at the moment, they are only four points shy of the fourth-placed Bayer Leverkusen, meaning they could well challenge the European positions with a positive streak of results.

Hoffenheim could easily make it back-to-back Bundesliga victories on Saturday afternoon as they travel to Sportpark Ronhof Thomas Sommer to take on the worst team in the division in Gameweek No 13.

Greuther Furth can already begin plans for the 2. Bundesliga football next season although we are only 12 matches into the current campaign.

Nevertheless, they clearly lack quality to stay competitive at this level. They took only one point in 12 league fixtures this term.

They will go into this off the back of another disaster, having fallen 4-0 away at Borussia Monchengladbach after the international break.

Tips for Greuther Furth vs Hoffenheim