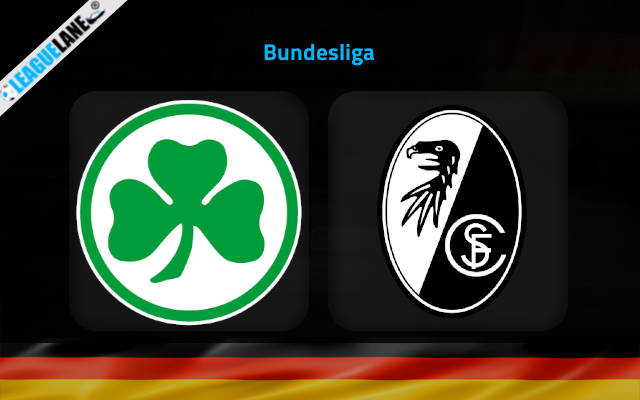 Freiburg will have a great chance to continue their extraordinary campaign in this term of Bundesliga on Saturday afternoon when they travel to Sportpark Ronhof Thomas Sommer to battle the last-placed Greuther Furth in the 27th round of Bundesliga.

Freiburg have well confounded pre-season ambitions and expectations so far in the season. They share the sky-high fourth position with RB Leipzig and Hoffenheim, and are only one point shy of Bayer Leverkusen in third spot at the moment.

Could we possibly listen to the UEFA Champions League anthem next season at Europa-Park Stadion?

The latest of successes came seven days ago when Christian Streich’s men saw off Wolfsburg 3-2 at home thanks to a late winner form Nico Schlotterbeck.

Freiburg won four and drew one of the last five games in all competitions. On top of the league successes, they have also advanced to the DFB Pokal semifinal where they will battle second-tier side Hamburg in a month.

Greuther Furth, on the other side, will most likely play 2. Bundesliga football next season. The hosts are nine points below Stuttgart who hold the relegation playoffs position at the moment.

There is nothing to suggest that they could potentially rescue themselves in the final eight rounds of the season.

Stefan Leitl’s troops took only one point from the previous three Bundesliga games. They suffered a tough 1-6 home loss to RB Leipzig on Sunday.

Everything points towards a pleasant afternoon for the visitors at Sportpark Ronhof Thomas Sommer on Saturday. Greuther Gurth have the worst defense in the top flight of German football and Freiburg have just bagged three goals past Wolfsburg last weekend.

We will back the away win as the main betting option at the odds of 1.70, while you can also take the huge 2.87 odds offered for in-form Vincenzo Grifo to score anytime for the visitors here. Grifo completed a brace in the victory over Wolfsburg seven days ago.