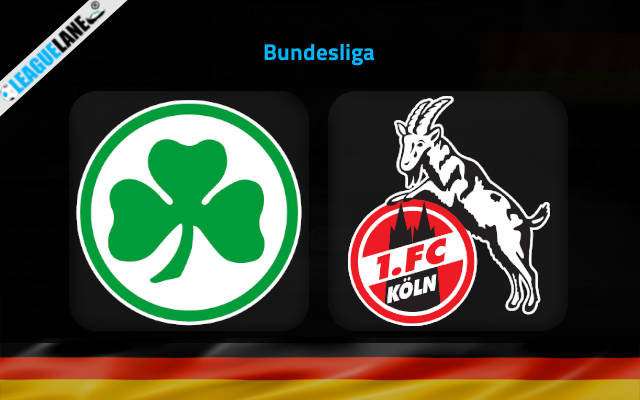 Greuther Furth had a sensational first-half lead against Bayern Munich at Allianz Arena but went on to concede four second-half goals in what ended as a tough defeat against the Bavarians.

The team led by Stefan Leitl are still at the very foot of the Bundesliga standings with only 13 points collected in 23 outings so far in the season.

However, we must say that their form has seen a significant upside in the last couple of months as Furth lost only two of the previous seven league affairs.

Leitl can be particularly pleased with his team’s form at Sportpark Ronhof Thomas Sommer where Furth managed a streak of three wins and two draws in the last five Bundesliga matches.

The hosts are still nine points away from the safe zone but the possible continuation of such a fine home form might at least get them in contention for avoiding relegation by trhe end of the campaign.

FC Koln will be the rivals who stay between Greuther Furth and a streak of three successive home wins.

Koln have had a great campaign in this term of Bundesliga and currently sit only two points shy of the fourth-placed RB Leipzig.

FC Koln dispatched Eintracht Frankfurt 1-0 at home last weekend with a goal from their top scorer Anthony Modeste who took his phenomenal league tally to 15 goals despite only coming on from the bench on the occasion.

Koln have been the dominant force in the history of this head-to-head match up against Furth and they come to this game on the back of three straight wins having scored three goals in each.

All of the last six games FC Koln played on the road saw goals scored at both ends. We expect the continuation of such a trend knowing that Greuther Furth managed two straight 2-1 wins in the previous two home outings, as well as a goal in the away game against Bayern Munich last weekend.

As for the outcome, we will rather choose the draw over away win knowing that Greuther Furth are unbeaten in five successive league games at Sportpark Ronhof Thomas Sommer.