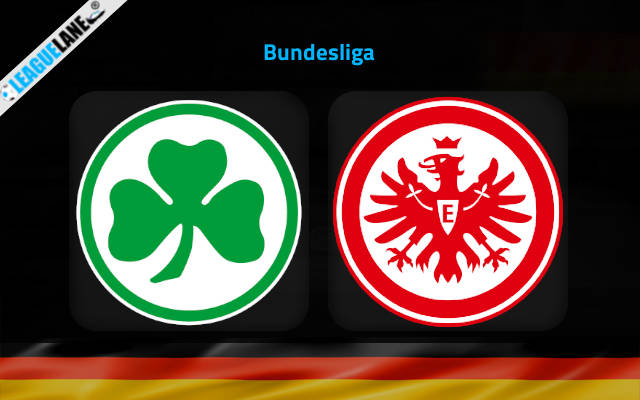 Furth took only one point in ten league matches this season. They are up against a team that saw off Olympiacos 1-2 on the road in the UEFA Europa League three days ago. We can hardly see any other outcome but the away win here.

Sunday’s trip to Furth will provide Eintracht Frankfurt a great chance to get their Bundesliga campaign up and running.

Eintracht have won only one of the opening ten games of the season. They did lose just three as well, drawing in as many as six outings in the process.

Nevertheless, the team led by Oliver Glasner should come into this match in high spirits.

They found the late equalizer in the home clash against RB Leipzig last weekend and they backed up that point with a 1-2 victory away at Olympiacos in the UEFA Europa League on Thursday evening.

Jens Hauge bagged the late winner at Olympiacos and it will be very interesting to see whether the Norwegian forward will get the nod in the starting lineup here against Furth.

Greuther Furth should really not trouble the visitors here. They sit at the very foot of the Bundesliga standings with just one point after ten rounds.

The hosts have the weakest defense and the worst attack of the entire league. They clearly lack quality to stay competitive at this level and it is very hard to back them against any opposition in the league unless something drastically changes in and around the team.