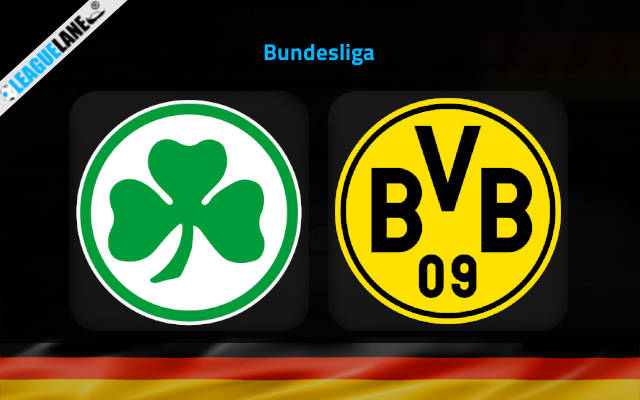 Greuther Furth and Borussia Dortmund will take on each other in one of the most meaningless games of the season on Saturday afternoon in Matchday No 33.

The hosts will be hoping to leave a nice impression in their last top-flight game in front of their fans before returning to 2. Bundesliga football next season.

Borussia Dortmund, on the other side, want to bounce back from consecutive defeats to Bayern Munich and Bochum in the previous two rounds.

Marco Rose’s men are five points clear off Bayer Leverkusen in third place and a win here would secure them the runners-up finish in this term of Bundesliga.

They also have a clash against Hertha Berlin on schedule on the final day at Signal-Iduna-Park, meaning a miracle should happen for Borussia Dortmund not to finish second at the end of the season.

Der BVB have conceded seven goals in the last two defeats, including as many as four in the home fixture against Bochum seven days ago.

We have seen at least four goals in four of the previous five outings Borussia Dortmund played in the league.

Greuther Furth own the worst defensive record in the elite class of German football and we have plenty of reasons to expect another high-scoring scenario when these two outfits come across each other.

The gulf in quality between these two rivals is huge and we can’t back anything else but a comprehensive victory for the visitors in what should be a high-scoring affair by all means.

You can back Borussia Dortmund to win by two or more goals difference at the odds of 1.80, while the Over 3.5 goals FT bet is paid at the 1.90 odds.