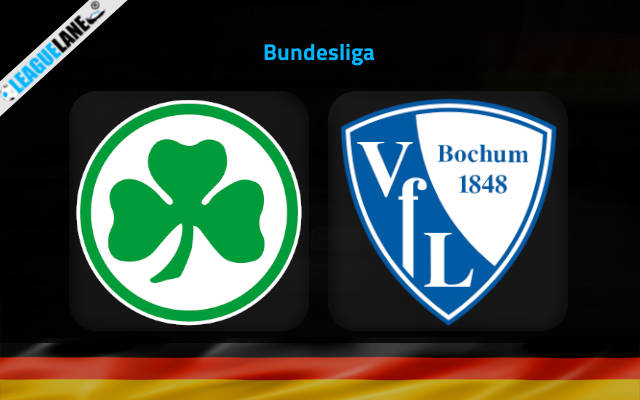 Greuther Furth take on Bochum in Saturday’s Bundesliga fixture at the Trolli Arena. Read our Preview, Prediction and Betting Tips with Analysis.

In the last 10 encounters between both these sides:

The hosts currently sit rock bottom in the Bundesliga table with just 1 point on board after 7 league games as they have lost all their previous 5 league games.

Furth come into this fixture on the back of a 3-1 loss away from home against FC Koln in a game which saw Marco Meyerhöfer give Furth the lead in the opening 7 minute of the game.

On the other side of the field, the visitors, Bochum currently sit second-last in the group table with 4 points on board after 7 league games as they have lost 4 of their last 5 league games. The other game ended in a draw.

Bochum come into this fixture on the back of a 3-0 loss away from home against Leipzig in a game which saw Bochum have 40% of ball possession with 9 shots on goal with just 2 of them on target.

Taking the above into consideration, we back the odds at 2.00 for Draw no bet in favour of Bochum. The away side has shown some attacking intent in the past and even when they were being trashed on their away visits, they had a few attempts on goal. Hence, we favour the away side in this fixture.

Consequently, we back the odds at 1.61 for both teams to score in this fixture. With Bochum having a horrible defensive record in their previous away games so far this season, we see that both sides will be pushing for a win in this game. Hence, we should comfortably see both teams scoring in this fixture.

Tips for Greuther Furth vs Bochum