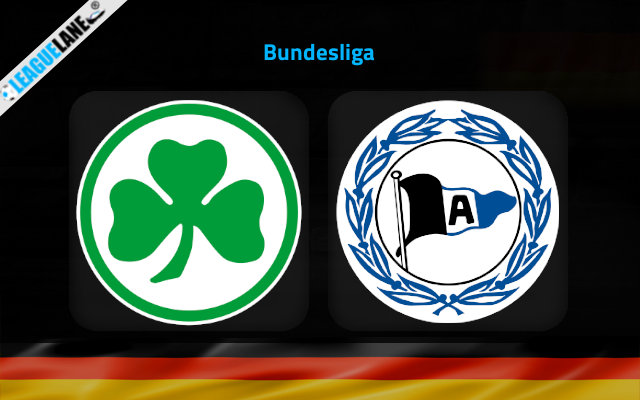 The last time Furth celebrated a league victory was on the 18th of September. This was the only victory for them in this season. Now they are at the root of the table. They will welcome rivals Arminia at Sportpark Ronhof Thomas Sommer for an important game.

The host are already fighting a relegation battle at this early stage of the campaign. Do note that more than 50% of their matches have ended in a stalemate.

Now they have a good chance to end their four-game winless run as the visiting team is just one point above them. In their most recent outing, the host were defeated by Heidenheim by 3-1.

The goalkeeper stopped three shots in that game. Yet, it was not enough for them to even earn one point. This result puts the team at the eighteenth position on the table.

The first on the agenda for Alexander Zorniger’s side is to secure a win at any cost. As three of their last four matches have ended in a stalemate. This game is their best chance to claim three points.

Previously in the game against St. Pauli, Arminia won by 2-0. Janni Serra scored an important brace in that victory. This is their third win of the season.

The visitors are facing a very difficult situation, as they are on a four-game losing streak in their away fixtures. This is what Ulrich Forte is concerned about ahead of this game.

Nearly 60% of the games have ended in a defeat for the visitors.

On that note our first prediction is that Greuther Furth will win this game by 2-1 – at 9.00 odd. This is after considering that the visitors have lost their last three away fixtures by conceding at least two goals. Furth scored two goals against Rostock in their last home game.

Our second tip for this game is that Both Teams to Score – the odd for this tip is at 1.61. In the last six consecutive encounters, both teams have scored plenty of goals. The only time this fixture lacked any goals was when these teams played over four years ago.