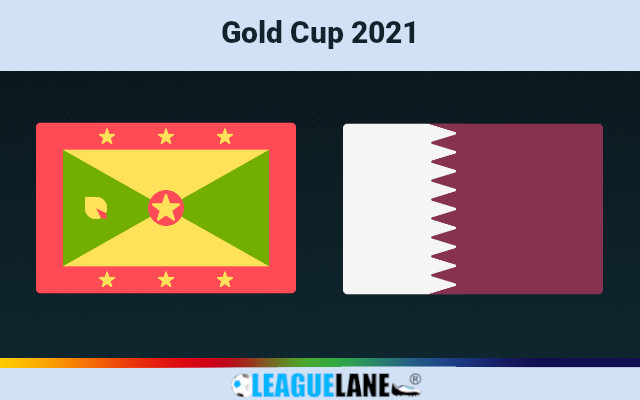 Both Grenada and Qatar are hoping to record their historical inaugural victory at the Concacaf Gold Cup when they meet each other on Saturday evening in Houston.

Grenada are only making their third Concacaf Gold Cup appearance this year. They have lost all six games in the group stages in 2019 and 2011 respectively, scoring just one goal in the process.

They began the 2021 edition with a tough 4-0 loss to Honduras four days ago. The Canadian manager Michael Findlay is well aware that this team has limits and even one goal scored at this competition would represent success for them.

The team’s top scorer is Jamal Charles (plays for Grenadian side Paradise) who has scored 14 goals in 25 appearances for his country. Nobody else has scored more than four goals in Grenada’s shirt.

Qatar thus head into this clash as heavy favorites to pick up their maiden victory as guests at the 2021 Gold Cup tournament. They have already left a strong impression on the debut, playing a 3-3 draw to Panama in a crazy second half of a six-goal thriller.

All of Qatar’s three top players (Akram Afif, Almoez Ali, and Hassan Al Heidos) were on target on the occasion. They should all have plenty of room to shine in the final third against arguably the worst team in the entire tournament.

We should also mention that Qatar are unbeaten in 2021. They have record six wins and two draws in eight games so far this year.

This will be the first-ever head to head encounter between the two teams.

Grenada have lost all seven matches at Concacaf Gold Cup over the course of history, conceding at least four goals in six of these seven defeats. They have scored just once at the opposite end in the process.

We thus can’t expect anything else but a comprehensive victory for the Qatari side who can make a significant step towards the knockout stage of the competition with a result here. The only question is how many goals will end up in Grenada’s net. The number should certainly be higher than two.

wpDataTable with provided ID not found!