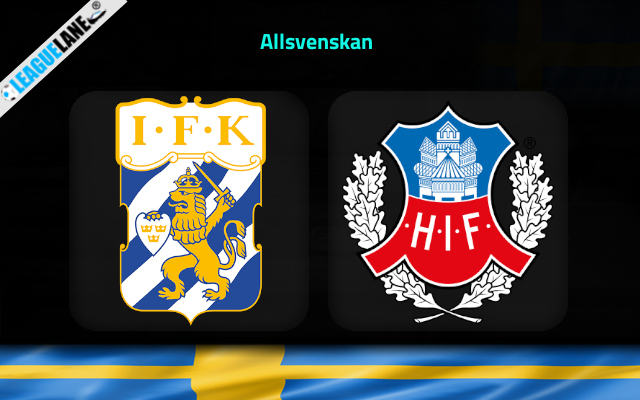 Goteborg and Helsingborg will meet each other in the last game of Matchday No 22 in Swedish Allsvenskan on Monday evening at Gamla Ullevi.

The hosts will be looking to extend the two-win streak and continue the push for the European positions having already climbed to the fifth place in the league ladder.

Goteborg should not have a tough task to do so here against Helsingborg who are second from bottom and in danger of getting relegated to Superettan football next season with just nine games left to play.

Helsibgborg own the worst offensive record in the whole league with just 16 goals scored in 21 outings so far in the season.

They will go into this off the back of a 3-21 defeat to bottom-half rivals Varnamo. The team led by Mattias Lindstrom now have three losses in the league five league affairs and there is really not much to suggest a positive scenario for them on Monday night in Goteborg.

To make matters worse, Helsingborg have a dreadful record on travels with 1 win, 2 draws, and 7 losses in 10 away matches in the league.

On the other side, Goteborg have the second-best defensive record in the competition. They will come into thus encouraged with a demolishing 1-4 victory away at Mjallby.

It was the team’s second successive victory, following the 2-0 home success against Sirius.

Everything points towards an easy job for the hosts and we will back them to claim the third successive Allsvenskan win over the struggling Helsingborg side at the 1.66 odds.

Since Goteborg have the second-best defensive record in the league and no other team in the Swedish elite class has notched fewer goals than Helsingborg this season, we will also back the hosts to keep a clean sheet at the odds of 2.25.