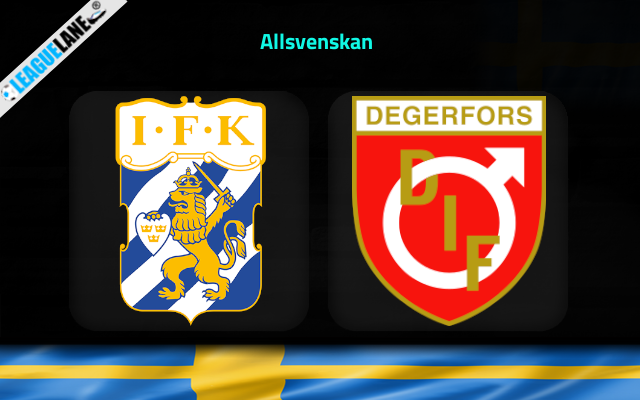 Goteborg had a strong start to this season. Their unbeaten positive start in the first four league fixtures allowed them to occupy the safe zone spot of the table. However, they failed to maintain their strong run and are currently having a winless form which resulted in losing the temporary safe zone spot.

Goteborg recorded a 1-2 win on road against Sirius in their most recent league fixture. With that win, they have returned back to the winning ways woving a thread of two positive outcomes. They will be hoping to extend the thread more by sealing positives further.

Degerfors had an unimpressive start to this season. They recorded a set of negative displays consistently to push themselves down to the relegation spot of the table. Their form is much worse than that of the bottom spot occupier Helsingborg and what keeps them above the bottom is their two positive recordings so far this season.

Degerfors recorded a 1-1 draw at home against AIK Stockholm in their most recent league fixture. The above draw have recorded back their winless streak which was lost a couple of games ago prior to a couple of wins. However, they have currently conceded eight defeats of their 11 games this season.

The home form of Goteborg is decent so far this season. They are unbeaten in four of their 5 league fixtures at this venue. Their offensive line-up have scored goals in each of those.

On the other side, Degerfors have a pathetic form on road. They have not displayed a better outcome since the beginning except for a 2-3 win recorded before their most recent on road league outing which was a negative outcome.

Analyzing all the above stats, we are left to back Goteborg to seal a win from this fixture against Degerfors.