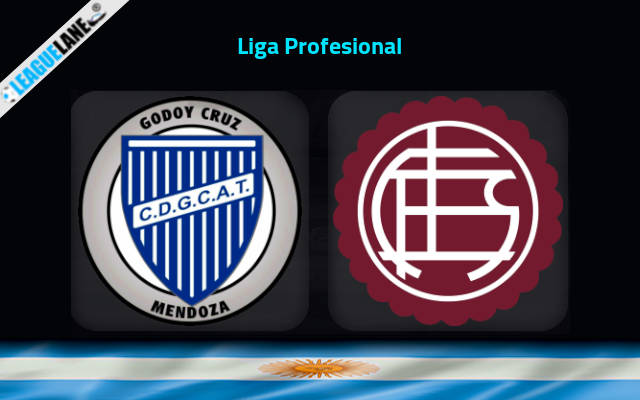 Matchday 8 of Liga Profesional is set for this weekend as Godoy Cruz play host to Lanus where both these sides differ by 8 points but are separated by 22 places. These two teams will be seen clashing at Estadio Malvinas Argentinas, this Sunday.

Godoy Cruz is at the 5th spot on the standing with 13 points from 7 games. They won 4 times in the league while drew once and lost 2 other occasions. Momentum is really building for them as they have now gone 5 games without losing while winning the last 3 in succession.

The home team will want to continue from where they left off last time out with the 2-0 Superliga win over River Plate. Fewer than three goals per game were seen in 5 of the last 6 meetings where Godoy Cruz have been participants.

On the other side, Lanus resides at the 27th position on the table with 5 points. Of the 7 matches played, they won once while drew twice and lost on 4 other occasions. They have one of the worst defensive sides in the league, conceding 11 goals overall while losing the last 3 fixtures in a row.

After suffering a 2-3 loss in their previous game against Huracan, the visitors and will hope for a better result here. During their previous 6 matches, Jorge Almirón’s men have found the back of the net a total of 5 times, yielding them a goals per game average of 0.83.

Incredible stuff is seen from Godoy Cruz at home, where they are currently unbeaten in 9 games. They also won the last 5 home fixtures in a row while maintaining 4 cleansheets. Moreover, they remain unbeaten in their last 2 h2hs.

Meanwhile, Lanus lost the last 4 away games in a row, conceding at least twice on each. They have never won a game on road in Liga Profesional and has been one of the worst away performer of the season.

Considering their previous h2h stats and current home form, we feel that a home win is likely to occur this weekend.