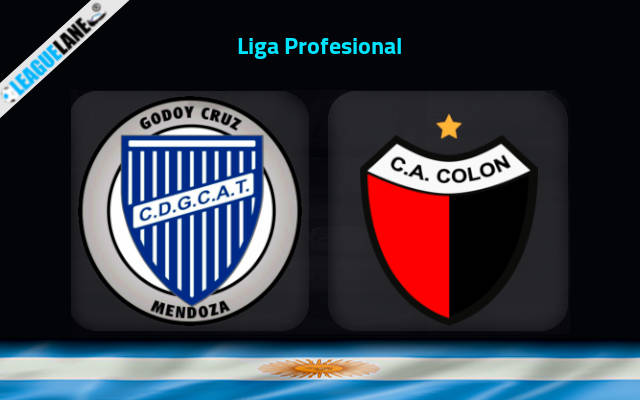 Godoy Cruz prepare for this fixture following a 1-1 Liga Profesional stalemate over Atletico Tucuman. From the 5 matches played so far, they won and lost 2 games each while having drawn on one other game.The hosts now sit at the 10th spot with 7 points added to their name.

The home side have lacked consistency so far this season but have scored in all but one of their Liga Profesional games so far which helps in their bid to find an upturn in form. Two of the preceding 5 Godoy Cruz clashes resulted in over 2.5 goals, with both sides scoring in three of those.

On the other side, Colon resides at the 21st position on the table with 5 points. Of the 5 matches played, they lost and drew 2 games each while having won only once. They come into this one off the back of consecutive defeats which have derailed their positive opening to Liga Profesional.

In the game prior to this, the visitors drew 1-1 in the Copa Libertadores tie with Talleres. Their latest Superliga match was against Huracan on Saturday, with the outcome being a disappointing 0-1 defeat at home. Colon have been scored against in 5 of their last 6 matches, seeing opposing sides hit 6 goals in all.

Godoy Cruz haven’t beaten this visitors in their previous 5 h2h encounters. But they won their previous 4 matches at home maintaining 3 cleansheets in the process. They have also won both the home matches played in Liga Profesional.

Meanwhile, Colon are without a win away from home in their last 12 matches. They have been awful on road and has never won an away game in this tournament. But they remain undefeated in their previous 5 h2h encounters.

Due to the impressive home performance of Godoy Cruz, we feel that they could snatch a win this weekend.