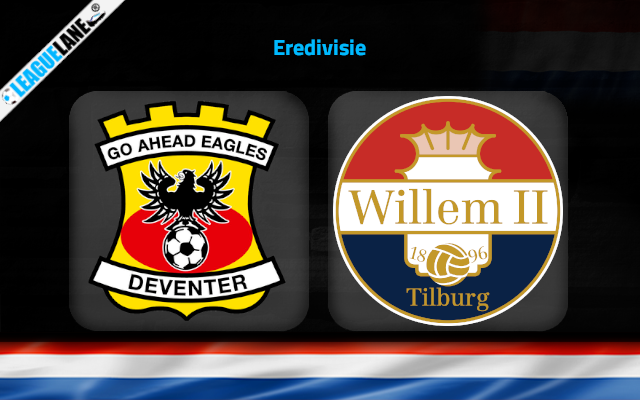 Go Ahead Eagles have managed to record some positive displays in the league lately. They have collected 10 points from the past 5 league fixtures to add up to a total of 33 points for occupying the 10th spot of the table. They have an average offensive and a disappointing defensive lineup.

Eagles were last seen recording a 0-1 win on road against PEC Zwolle in a Eredivisie fixture. With that win, theya re now on the back of two subsequent winning games in the league. They will be hoping to make it three.

Meanwhile, Willem ll are on the verge of the relegation picture. They sits 15th on the table with a total of 23 points. They are having a disappointing form and have recorded a positive display very rarely. They have a disappointing offensive and defensive lineup.

Willem ll lost 2-0 at home against Feyenoord in their most recent league fixture. They are now winless since 7 games. Five of these 7 games are negative displays. They will be hoping to secure themselves by staying away from the relegation zone with enough of points. But they doesn’t seems to be motivated enough to seal points from their coming fixtures.

We are not falling for the head to head displays of Willem ll as the current scenario is entirely different from their past recordings. We can see Go Ahead Eagles winning the reverse fixture too.

On top of that, Willem ll have lost each of their past 9 on road league fixtures. Such a pathetic form of Willem ll is more than enough to back Go Ahead Eagles to seal a win from this fixture. Also, we don’t expect a one-sided affair as both these outfits possess a weak defense.