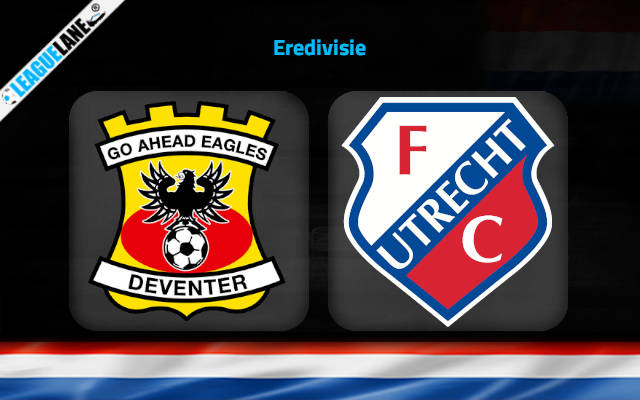 Go Ahead Eagles vs FC Utrecht Predictions and Free Tips from our expert tipsters when the teams go head-to-head in the Dutch Eredivisie on Sunday, 15 January 2023.

It has been a while since Go Ahead Eagles have conceded a defeat. They are on a 10-game unbeaten streak at the moment. But they still fail to secure a safe zone spot. The main reason for such a cause is the often recording of a drawn outcome.

Eagles have recorded a draw in six of their last seven matches. Such a form will affect them on Sunday as they faces an in-form FC Utrecht, who follows a five-game unbeaten streak in the league.

Go Ahead Eagles have not emerged victorious in the last five league meetings against FC Utrecht. The past two meetings ended in a draw.

At this venue, Utrecht is on a four-game unbeaten streak against Eagles. Five of the last seven meetings had goals from both ends.

Who will win the match between Go Ahead Eagles vs FC Utrecht?

Although Eagles have managed to remain unbeaten in the last five league outings at home, we don’t expect them to seal a win here.

Utrecht, who have won four of their last five road trips, seems to have more strength than Eagles, who have a set of draws at home to display.

However, we are not ruling out the chances of a draw here. A draw no bet in favour of Utrecht looks ideal enough for this match.

Utrecht leaked goals in five of the last seven road trips. Eagles have often been leaking goals at home too. The attacking side of both these sides are in a shape to score at least one. Therefore, expect goals from both ends of De Adelaarshorst on Sunday.

The past two head to head games between these two had ended in a draw. Eagles are having a set of drawn outcomes lately too.

In that case, Draw no bet: Utrecht at 1.66 odds will be our main betting pick for this match while backing both teams to score at 1.57 odds as the alternative pick.