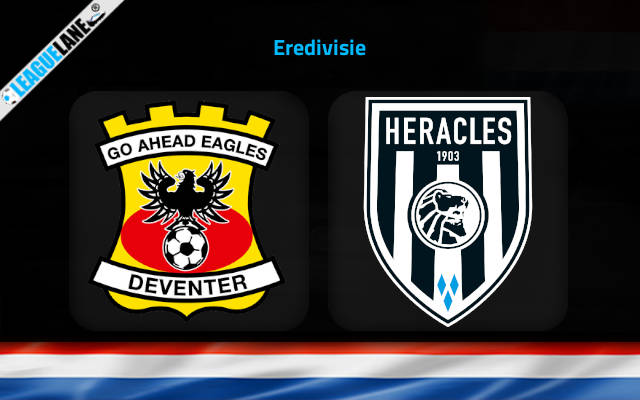 Go Ahead have been relatively tough to break down at home this season, shipping only three goals in four league outings at De Adelaarshorst. They’ve played the likes of Heerenveen and PSV in the process. Knowing about Heracles’ struggles on travels in this term of the Eredivisie, the home win or draw double chance looks great at the 1.57 odds.

Go Ahead Eagles vs Heracles Head-to-head

Heracles are looking for their maiden win on the road this season on Saturday afternoon when they travel to Deventer to battle recently-promoted Go Ahead Eagles in the 9th round of the Eredivisie.

The visitors took advantage of the easier schedule in the last several weeks to pick up three wins from the last four rounds.

Nevertheless, they did not quite shine in these victories. The latest, 3-2 against Willem II, came only after a stoppage-time winner from substitute Ismail Azzaoui.

Their German manager Frank Wormouth can, however, be worried about Heracles’ displays on travels.

The team took only one point from two away games this term. It is a subpar record if we know they’ve played the likes of Sparta Rotterdam and Cambuur in the process.

On the other side, Go Ahead Eagles claimed both of their wins at home this season. They’ve won two of the last three league fixtures in their backyard without conceding along the way.

Go Ahead Eagles won two and lost one (a narrow defeat to PSV) of the last three home matches in the league.

They have shipped only three goals in four home matches this term.

Heracles took one point from two away games this season despite playing the likes of Sparta Rotterdam and Cambuur along the way. Heracles scored two or more goals just twice in seven outings this term.

Tips for Go Ahead Eagles vs Heracles