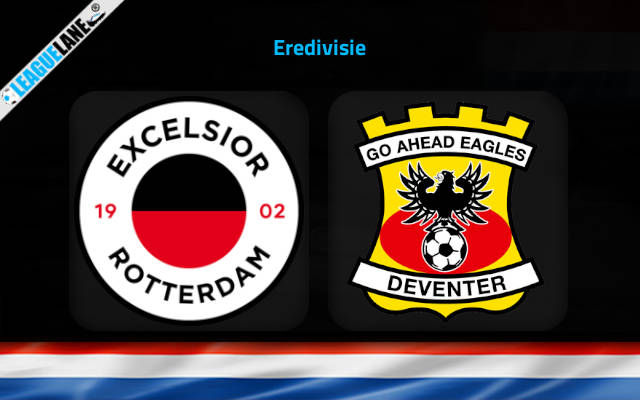 Excelsior finally ended their four-game winless run as they defeated AZ who are one of the best teams in the league. They will now hope for the same result against Go Ahead Eagles.

Before the victory against AZ Alkmaar the host were stunned when Ajax demolished them in a 7-1 thriller. What made it interesting is Ajax registered a record twenty shots on goal. This game raised many questions towards Marinus Dijkhuizen’s future.

All the concerned doubts were cleared as his team defeated AZ Alkmaar in the very next game by 2-1. Two first half goals from Siebe Horemans and Marouan Azarkan helped the team win all three points.

Go Ahead Eagles could not get past NEC last time as the game ended in a 3-3 draw. This is their fourth draw in a row. No other team is seeing such a form this season. They began this month by holding Ajax in a 1-1 draw.

René Hake’s team is now just two points above the relegation zone. Do note that they still maintain a good form at home.

Go Ahead Eagles vs Excelsior Head-to-head

Go Ahead Eagles vs Excelsior Prediction

Both teams are separated by just three points on the table. However, history is in favour of the host.

Therefore, our first prediction for this game is that Go Ahead Eagles will win this game – the odd for this tip will be at 1.75. The host have an excellent winning record against this side at De Adelaarshorst as they are unbeaten since the last seventeen years.

Our next tip for this game is that Go Ahead Eagles will keep a clean sheet – the odd for this tip will be at 2.00. For the last two years, the host have kept a clean sheet against Excelsior in two meetings.