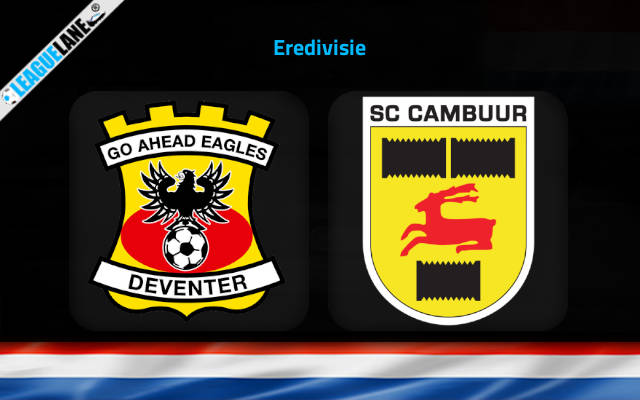 Two bottom-side clubs namely Go Ahead Eagles and Cambuur are slowly making progress this season. They will both play against each other at De Adelaarshorst for an early kick-off this Sunday.

In that 1-1 draw against Ajax, Willum Willumsson scored the equaliser for René Hake’s side in the 78th minute of the game. Ajax managed 23 shots in total however they could only score once. The team is at the thirteenth position on the table following this important draw.

On the other hand, the visiting side ended their four-game losing streak as they defeated PSV by 3-0. Do note that PSV are one of the top teams this season.

In that game, all the goals were scored in the second half of the game. This victory helped the team climb up from the relegation zone.

Go Ahead Eagles vs Cambuur Head-to-head

Go Ahead Eagles vs Cambuur Prediction

The most interesting thing to note is that both teams who are at the bottom half of the table have managed to upset PSV and Ajax in their most recent games respectively.

Also, both teams have lost the same number of games this season. Moreover, both these sides are unbeaten so far this month.

Our prediction is that Go Ahead Eagles will win by 1-0 – the odd for this tip will be at 10.00. At De Adelaarshorst, the host are unbeaten in the last three games against this side. Winning two of those games by scoring at least two goals.

Our next tip for this game is that Go Ahead Eagles will keep a clean sheet- the odd for this tip will be at 3.50. In the last three consecutive fixtures at De Adelaarshorst, the host have kept a clean sheet.