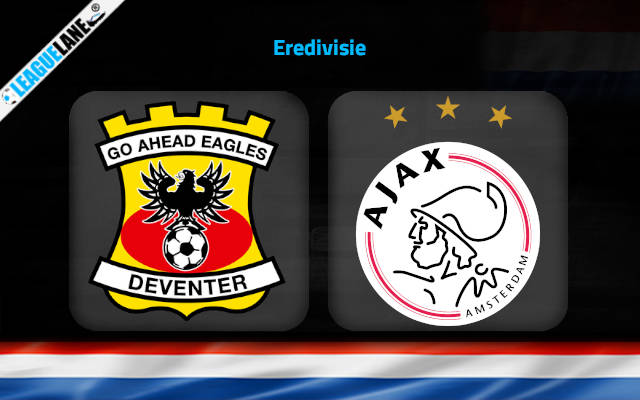 The defending Eredivisie champions are at top flight in the league winning the last 8 league matches in succession. They are currently in the zone of promotion to Champions League Group Stage and are 5 points safe from PSV who are second in the league. Go Ahead Eagles are down below struggling to find a win since the past 9 league fixtures. The league leaders with the hopes of extending their lead at the top, takes a roadtrip to De Adelaarshorst this Sunday to face the hosts in the upcoming fixture.

Go Ahead Eagles vs Ajax Prediction

Ajax is at top flight in Eredivisie with 57 points from 23 games. They won 18 times in the league while drawing thrice and losing only twice. They have scored a jaw dropping 70 goals in total while conceding a sum of only 5 which shows how profound their defense and offense lineups are.

The visitors had a 1-0 league win over Willem II in their previous match. A succession of accomplished performances by the Ajax defenders has resulted in the number of goals they’ve conceded standing at 3 from their past 6 fixtures combined. In that period of time, the number of goals that they have scored themselves amounts to 18.

On the other side, the hosts resides at the 14th position on the table with only 23 points. Of the 23 matches played, they won only 6 games while drawing on 5 and losing on another 12 other occasions. Their total goals to conceding ratio stands at 24:40 showing their far from perfect defense.

The home team head into this clash following a 2-2 Eredivisie tie against Twente, last week. They have managed to rack up 8 during the past 6 games while seeing the number of goals scored against them stands at 9.

The hosts have not won at home since the last 5 matches in the league while Ajax are undefeated in their previous 26 league matches away from home. Therefore we feel that an away win is unavoidable.