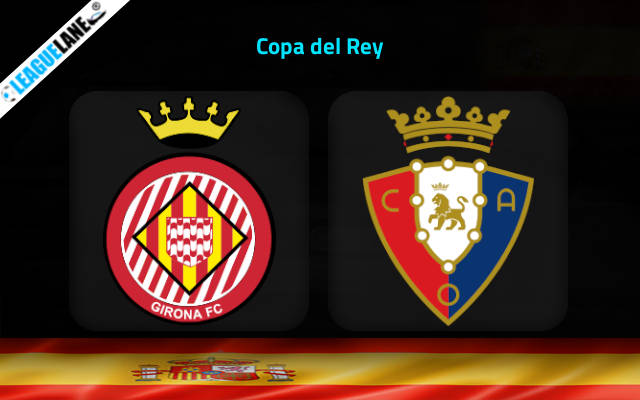 Girona will be looking to translate their fine league form to Copa del Rey on Thursday afternoon when they play host to top-flight Osasuna in the last 32 round of the competition.

Girona reached this stage by beating Huesca 0-1 on the road in mid-December. They defeated the same rival four days ago in Segunda Division as well with an identical scoreline.

It was the fifth win in the last six outings across competitions for Michel’s troops. Girona broke into the top-six in the Segunda Division ladder as a consequence.

Michel’s men have been particularly impressive in front of their fans lately. They won four on the spin at home in Segunda Division, netting at least three goals in three of thewse four victories.

On the other side we have Osasuna who failed to find the back of the net in five successive away games in the top flight of Spanish football.

They ended last year with a 1-0 defeat at Getafe. Also, Osasuna had a one day less to rest given they faced Athletic Bilbao on Monday evening in La Liga.

The team led by Arrasate are one of the most out-of-form teams in La Liga with the streak of nine successive games without a victory in the competition.

The fact they have failed to score past the likes of Levante and Getafe in the last two away fixtures in the league says enough.

Girona will enter this tie in much higher spirits and we see them as slight favorites to advance on Thursday. However, the Under 2.5 goals FT does seem to be the best of the betting options based on everything we’ve seen from the two teams of late.

You can back the Under 2.5 goals FT at the 1.57 odds, while we will alternatively back Girona to qualify to the next round at the 1.95 odds.