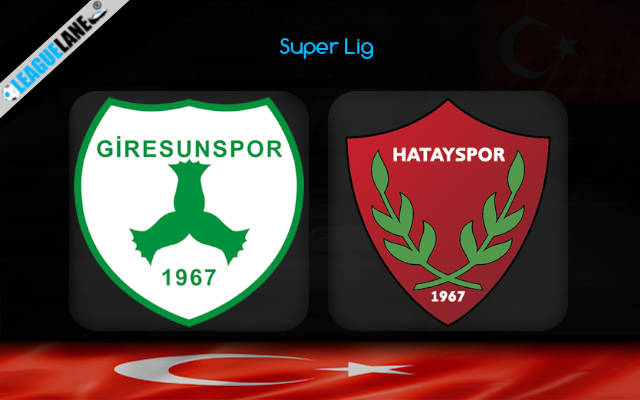 With only 7 points apart, Hatayspor is just a spot away from landing into the zone of Europa Conference League qualification meanwhile Giresunspor is at the second half with a previous league defeat. The guests have also been denied victory in 2 back to back games and hopes to tun the tables as they take a road trip this Saturday to Cotanak Stadyumu to face the hosts.

The home team is at the 13th spot with 22 points from 18 matches. They won 6 times in the league while drawing on 4 and losing on 8 other occasions. They have scored only 19 in total while conceding a sum of 18 which shows their poor offensive tactics.

Hakan Keleş’s Giresunspor have hit the back of the net 12 times while letting in 6 from their previous half a dozen outings. They have fired blanks in 7 games this season and have lost the latest league fixture by 1-3 against Basaksehir.

The visitors reside at the 6th position on the table with 29 points in hand. Of the 18 matches played, they won on 9 games while drawing twice in the league and losing on 7 other occasions. Their total goals to conceding ratio stands at 26:23 so far.

Things have not been going that well in front of goal for Hatayspor as of recent, with the side failing to score in 3 of the last 5 games. After their win against Altay, they lost momentum in the next 2 fixtures, losing to Trabzonspor and Konyaspor conceding 5 goals in total.

The hosts are now back to their home advantage where the team has won all of the last 4 duels. On the other side, the upcoming visitors have only won once in the last 5 league outings. Therefore, we are drawn to a conclusion that a win for the home team is likely to happen at Cotanak Stadyumu this Saturday.