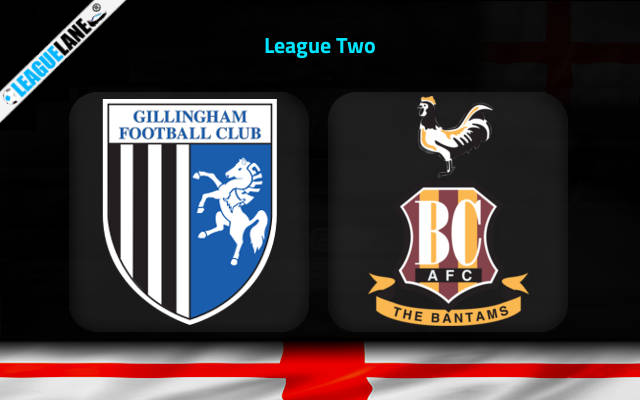 Gillingham and Bradford will drop the curtain on Gameweek No 21 in English League Two on Sunday afternoon when they take on each other at MEMS Priestfield Stadium.

The Gills are going through tough times this season. They suffered the elimination from League One football last year and they are on the best way to drop further down to National League this season.

Gillingham are currently second from bottom in the League Two standings with only 2 wins in the inaugural 20 rounds.

They have by far the worst attacking record in all professional leagues in England. Neil Harris’ troops notched no more than 6 goals in 20 matches this term.

On a positive note, the Gills did manage to pick up a precious 3-2 victory over lower-division Dag & Red in the FA Cup’s second round replay on Thursday evening.

On another note, though, their main stars may feel fatigue with this match against Bradford being played less than three days after such a thriller in mid-week.

Bradford hold the 6th position in the League Two standings but they will enter this tie off the back of three successive defeats in all competitions.

The latest of their failures came eight days ago when the Bantams fell 3-0 away at Leyton Orient.

Gillingham have not been pulling up any trees so far in the season and we see this game as an ideal chance for Bradford to return to winning ways after successive league losses.

The value is great in backing the visitors to win to nil at the 3.50 odds knowing that Gillingham have only managed to find the back of the net six times in twenty games this term.