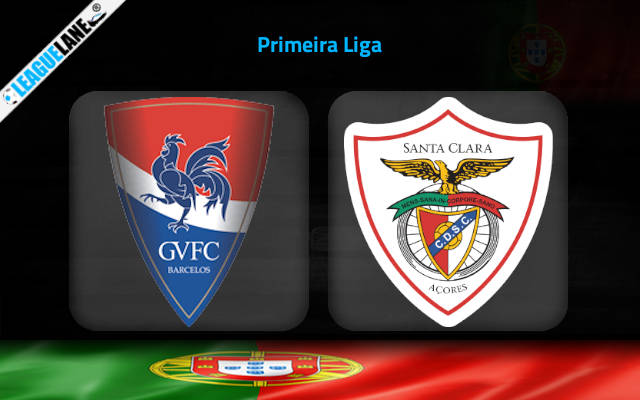 Gil Vicente vs Santa Clara Predictions and Free Tips from our expert tipsters when the teams go head-to-head in Liga Portugal on Thursday, 29 December 2022.

Gil Vicente have lost more than 60% of their games this season. They have performed well in the League Cup. Now they will return to Estádio Cidade de Barcelos to play against Santa Clara for their first home game in the league this month.

On the other hand, Santa Clara are out of the Taca da Liga as they have not won any of their group-stage matches. Before the break, they defeated Estoril by 3-1 in the domestic league.

In the last two years, both teams have clashed three times at Estádio Cidade de Barcelos and the host remains unbeaten in all three games.

Both teams last met back in February and the game ended in a 2-2 stalemate.

Who will win the match between Gil Vicente and Santa Clara?

Gil Vicente will likely win this fixture, they are unbeaten in the last three encounters at Estádio Cidade de Barcelos.

We can expect less than 2.5 goals combined. This is after considering that the number of goals scored were less than two in three of the last four head-to-head matches between these two sides.

Both teams have scored in only one match out of the last four encounters. Therefore, both teams will find it difficult to find the back of the net this time as well.

The host have won two of their last three games in all competitions. Therefore, the first tip is that Gil Vicente will win this game – at 2.15 odd. They remain unbeaten in the last two years at Estádio Cidade de Barcelos against Santa Clara.

Our second tip is that Under 2.5 goals will be scored – at 1.66. With just one exception the last three head-to-head matches ended with less than a combined total of two goals being scored.