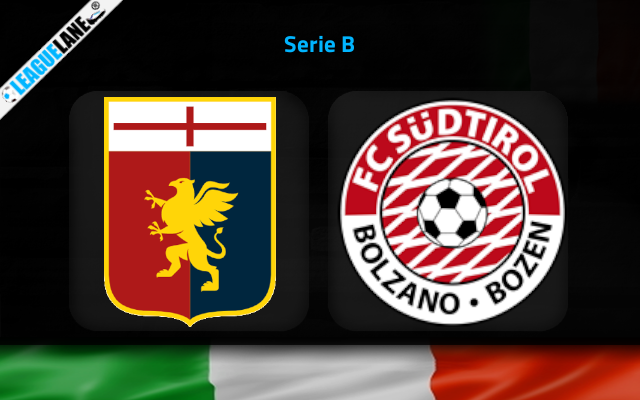 Genoa vs Sudtirol Predictions and Free Tips from our expert tipsters when the teams go head-to-head in the Italy Serie B on Thursday, 8 December 2022.

Bookmakers see the hosts as pretty big favorites to win this game, pricing them at just 1.50 odds. It is not very easy to understand why because they have been going through a disappointing slump in the past five league outings.

Meanwhile, Sudtirol are on a five-fixture winless streak and have dropped to 8th position in the league standings. Dropping points further will cost their safe zone spot. However, they will have some positive hopes since Genoa are also having a winless streak for the past five games.

They have only met once. It was during a friendly clash six years ago and Genoa won the match scoring three unanswered goals.

Who will win the match between Genoa vs Sudtirol?

Sudtirol is in an unbeaten form in the last five away matches. But Genoa is winless in the last four games at home stadium. However, three of those matches were draws.

Do also note that Sudtirol have also recorded a draw in their last two away matches. So the possibility of a draw cannot be ruled out.

In Sudtirol’s last three games the combined scorecard is 5:4. they have shown no shortage of scoring and conceding goals.

On the other hand, Genoa have been also scoring goals consistently. Therefore, it is not wrong to expect goals over 2.5 in this game.

Both the teams have conceded goals from the opposite sides in the last four games. There is no mistake in choosing both teams to score option in this game as neither team has a strong defense.

Since Sudtirol have a comparatively better unbeaten record at present and both teams have drawn in a couple of fixtures lately, we prefer to place Draw or Sudtirol at 2.37 odds as the main bet.

As the second bet, placing both teams to score option at 2.10 odds is optimal according to the goal numbers of either sides.