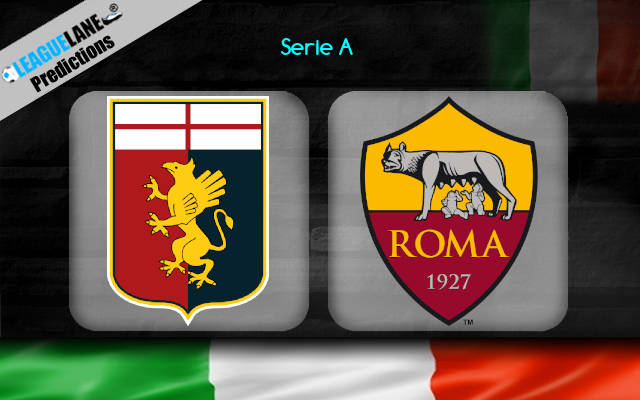 Roma confirmed their fine form in the final third and travel to Genoa on the back of a convincing mid-week win over Cluj (5-0) in Europa League, where Mkhitaryan, Ibanez, Borja Mayoral (x2), and Pedro all found the net. They now hope to build on the performance and challenge the top 4 in Serie A, sitting just a point behind Juventus and Atalanta.

Giallorossi beat Fiorentina (2-0) beforehand and earned ten points in their last four league outings, which will be a great boost. They scored a high total of 13 goals in their last five Serie A games and it’s obvious Paulo Fonseca should have no hard time keeping their team spirits high at this point.

Genoa have struggled to retain such consistency and while they’ve been scoring goals, just one win in six games since late September will hardly be enough – especially as it came in Coppa Italia. They held off Sampdoria (1-1) in Derby della Lanterna but then fell victims to Torino earlier this week, despite Scamacca’s late goal here. They will now want to bounce but will be in for another very tough challenge.

Roma beat Genoa in three of their last five clashes, with two draws seen along the way.

We’ve seen four or more goals in three of the last four occasions.

Genoa last beat Giallorossi in 2014, when a single goal proved enough to untangle the contest.

We will now back Roma to keep up such a streak in head-to-head clashes against Genoa and snatch all three points at Luigi Ferraris Stadium. They’ve been in great shape in the final third and should have what it takes to outgun the rivals struggling to impress early on, as we go for an Away win & Both teams to score at 3.00.

Still, Genoa will be no sitting ducks. They have been scoring goals quite regularly and we do see them causing damage, which ultimately promises a high-scoring occasion and has many heavy hitters going for Over 2.5 Goals FT at 1.57!