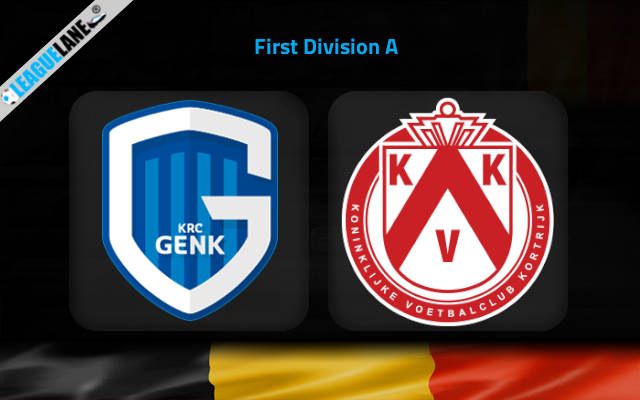 In game week 29 of Jupiler League, Genk faces Kortrijk for their next match on Sunday at Genk.

Genk couldn’t get past Anderlecht’s defence in their last match. Anderlecht, on the other hand, scored two goals in the match within the first half itself, ending the match in a loss for Kortrijk with 2-0 FT score.

Kortrijk’s win in the last match has ended the loss streak the team had amassed. Kortrijk scored five goals in the match while Zulte Waregem couldn’t score a single goal. The match ended in a win for Kortrijk with 5-0 FT score.

Genk has played fairly well in their matches this season. Genk has some inconsistency in their form. They seem to be out of form in their matches for a period, but made up for it in their following matches. The team currently sits 8th on the league table with 41 points. They have scored in four of the last five matches and have achieved wins in three of them.

Kortrijk has played moderately well in their matches. The team has got 9 wins, 10 draws and 9 losses from their matches. They seemed to have some trouble with their form in the recent matches. Their win in the last match put an end to the 7-game cold streak they had. The team now stands 11th on the league table with 37 points.

Genk has played well in their most recent matches, achieving over five wins in ten matches. Kortrijk’s recent form has put them in a difficult position which they will look to overcome. Both teams have however scored in most of their matches and we can expect them to do so in this match as well.

Genk also has the advantage of playing in their home ground where they are on a win streak in four continuous matches. Kortrijk’s away matches have not been so productive. Visitors are currently on a cold streak as well.

Looking at the record, the match is most likely to end in a win for Genk. The host has scored at least one goal in the first half of the match as well.