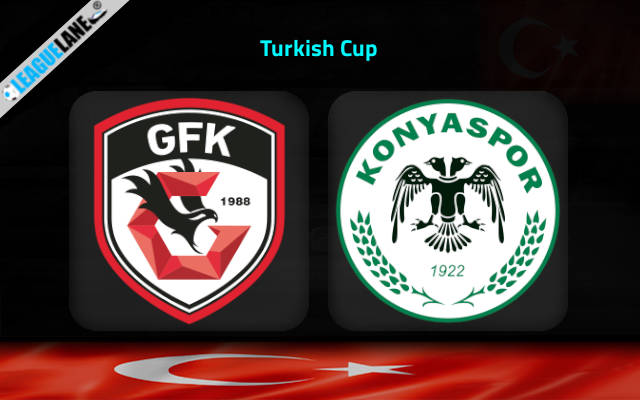 Gaziantep vs Konyaspor Predictions and Free Tips from our expert tipsters when the teams go head-to-head in the Turkish Cup on Thursday, 19 January 2023.

Neither Gaziantep nor Konyaspor is having a decent run in the Turkish topflight of late. Both these sides are having a winless form in the past four league outings.

Going on, Konyaspor is positioned at 7th in the standings, four spots and 8 points away from Gaziantep. Although the stats are comparatively better for Konyaspor, their current form is as displeasing as Gaziantep’s.

The past four overall wins were evenly split, with two each for both sides. Their latest meeting ended in a 0-1 win for Gaziantep.

Going on, they have played a Turkish Cup fixture in 2021 and the match finished in a 2-1 win for Konyaspor.

Who will win the match between Gaziantep vs Konyaspor?

Gaziantep is having a six-game winless streak at home in the league. We can see them sealing victories in a couple of Turkish Cup fixtures, but their opponents were from the lower divisions.

On the other side, Konyaspor follows an unbeaten streak of five games on the road. It deserves to mention that four of them were draws.

Considering these observation, predicting a clear winner from these two isn’t that easy. Since neither of these two have an upper hand in the recent history, we expect a draw here, going with the trend of both these sides of recording stalemates.

The attacking side of both the teams are consistent and have been scoring even in the matches they have lost lately. However, we are not going for an over 2.5 goals bet considering the low-scoring recordings of Gaziantep at home.

A score draw have often been recorded by Gaziantep at home. The same can be seen in Konyaspor’s away recording too. In that case, we expect a both teams scoring scenario at Gaziantep Stadyumu on Thursday.

A good number of drawn outcomes have been maintaining the winless thread of both the teams. We are left to consider a draw display here with these two having such an inconsistent form while being consistent only in recording draws.

For the betting picks, we like to start with a draw at 3.10 odds while placing both teams to score at 1.67 odds as an alternative.