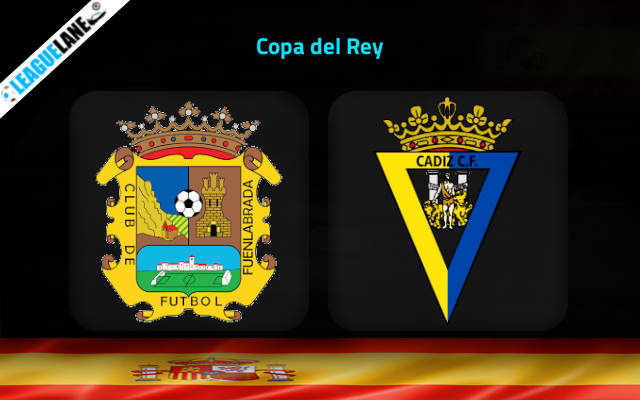 Both Fuenlabrada and Cadiz have ended their respective Copa del Rey campaigns in the last 32 round last season.

One of the two outfits will make at least one step further this time around as they take on each other in the R32 on Thursday afternoon at Estadio Fernando Torres.

Both teams sit near the very bottom of the standings in their respective divisions. The hosts are third from bottom in Segunda Division, while Cadiz hold the penultimate 19th position in La Liga ladder.

Both sides began the year with tough clashes. Fuenlabrada fell 1-2 at home to Ibiza on Sunday, while Cadiz played Sevilla in the last fixture of the Matchday No 20 in La Liga on Monday evening at Estadio Nuevo MIrandilla.

In these circumstances, we have to fancy the higher-division outfit. After all, Cadiz held mighty Real Madrid to a goalless draw in their previous away fixture in the elite class of Spanish football.

If we count the 0-1 win at Albacete in the previous round of Copa del Rey, Cadiz went on a run of three straight outings without a defeat across competitions.

The visitors have kept three clean sheets in the last four away matches in all competitions. They are up against Fuenlabrada who own the joint-worst attacking record in the second class of Spanish football this season.

The hosts notched no more than 16 goals in 22 league affairs so far in the season.

Seven of last eight matches Fuenlabrada played in all competitions ended with fewer than three goals scored. Cadiz have also played some low-scoring affairs of late.

Both previous head to head encounters between these two rivals ended in 1-0 scoreline. The Under 2.5 goals FT is by far the best betting recommendation at the 1.50 odds here.

We will also back the draw at the 3.00 odds knowing that four of the last five games Fuenlabrada played on the home patch ended without a winner.