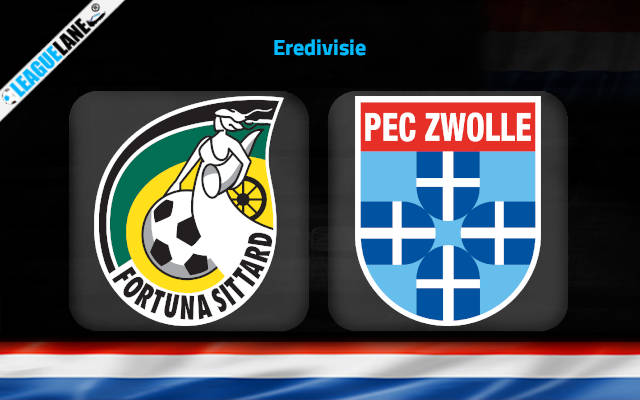 FC Zwolle is devastated at the bottom after their previous loss in the league. With the lowest points in the group, they are the first one to probably get relegated to Eerste Divisie.

Sittard is third from the bottom and are also in the red zone. They lost their last league match which ended their chance to complete a hat-trick set of wins.

Only two points and a place apart, the Blauwvingers will travel to Fortuna Sittard Stadion this Sunday for the upcoming fixture, that’ll certainly save one from relegation.

Blauwvingers resides at the rock bottom closing the 18th position on the table with a mere 17 points. Of the 24 matches played, they won 4 times in the league while drawing on 5 and losing on 15 other occasions.

PEC Zwolle had a 0-2 Eredivisie loss in their last game against Heracles. They have been scored against on 5 of their last 6 games, seeing their opponents hit 9 goals overall.

On the other hand, Fortuna resides at the 16th position on the table with only 19 points. Of the 23 matches played, they won only 5 games while drawing on 4 and losing on 14 other occasions. Their total goals to conceding ratio is the worst in the league at 25:52 exposing their defensive weakness.

The home side suffered a 1-2 league loss, last week against Cambuur. Sjors Ultee’s men have scored a sum total of 6 times over their preceding 6 outings. The sum total of goals that they have conceded during the same time stands at 11.

The visitors are left without a victory over Sittard when having played them away from home in the previous 3 league games. Also, the away form of visitors is not that impressive as they won only twice from the 12 games played on road this season.