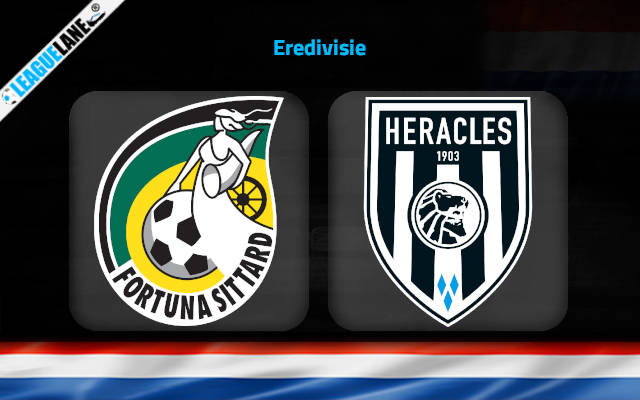 The relegation placed Fortuna Sittard will be hosting Heracles, who are only 2 places and 5 points above them. They two will battle out at Fortuna Sittard Stadion this Sunday for the 28th Round of Eredivisie.

Heracles is at the 13th spot on the standing with only 27 points from 27 games. They won 7 times in the league while drawing on 6 and losing on 14 other occasions. The visitors lost thrice of their last 5 fixtures and are currently on a 2-game losing run across all competitions. They really need to improve their finishing side in order to climb further up the table.

The visitors lost to Heerenveen by 0-2 in the previous fixture. Frank Wormuth’s men have netted 5 times in the course of their latest 6 matches. The overall goals that have been scored against them during the same equals 7.

On the other hand, Sittard resides at the 16th position on the table with a mere 22 points. Of the 26 matches played, they won only 6 games in the league while drawing 4 times and losing on 16 other occasions. They lost thrice from their last 5 league fixtures and are only a point away from going further down. The home side has the worst conceding figures in the league with 58 in total.

Fortuna Sittard suffered a terrible 5-0 league loss in their previous game against PSV Eindhoven. An interesting feature of their recent games is the number of results with a nil in them. From their previous 6 clashes before this one, in as many as 5 of them a wager on both teams scoring would have been a losing one.

Fortuna Sittard conceded at least once from 9 of their last 12 home matches. Coming into this clash, they remain winless against Heracles in their previous 2 matches in the league.

Meanwhile, Heracles have not won away from home in their last 17 league games. But they won their last h2h on-road.

We feel that a draw is the likeliest outcome as both sides are neither good at defending and are weak as of recent.