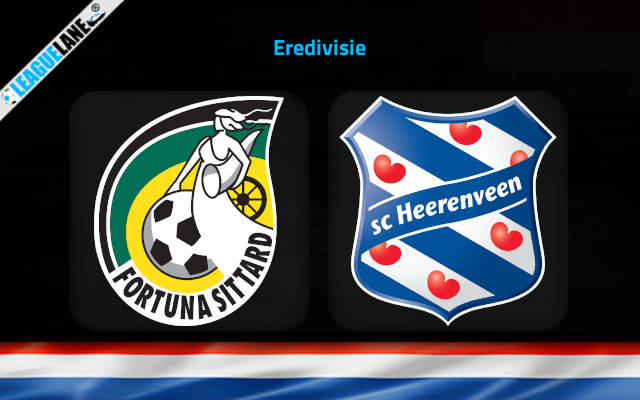 Fortuna Sittard vs Heerenveen Predictions and Free Tips from our expert tipsters when the teams go head-to-head in Dutch Eredivisie on Wednesday, 25 January 2023.

Heerenveen have a single defeat to their name in the last five game weeks, and this sole loss came against the second-placed AZ Alkmaar. They are currently in possession of the seventh spot in the table, and have been one of the best in road fixtures in the Eredivisie.

Meanwhile, Sittard won just twice at this ground this whole league season, and they have one of the worst defenses in the Eredivisie. In fact, only three teams managed to concede more goals than them in the campaign.

The latest encounter ended in a 2-1 win for Heerenveen at home, and they also won 10 of the past 15 h2h clashes. Moreover, Sittard managed to win just twice at this ground since 2001 in h2h encounters.

Who will win the match between Fortuna Sittard and Heerenveen?

Heerenveen have a dominant h2h record against this rival – and particularly so at this venue over the past two decades.

Going on, Sittard registered a single win in the last three months, and just four in total since May of 2022, in all competitions. And at this venue, they were able to deliver just two wins in the past eight months.

At the same time, Heerenveen experienced defeat at the hands of just four teams in the last 11 months – and three of these are considered to be amongst the absolute best in the Dutch top flight – Ajax, PSV, and AZ Alkmaar.

Likely, chances are very high for Heerenveen to deliver a winning performance this Wednesday.

Meanwhile, Heerenveen just recorded a 3-1 win against Groningen, and are determined to keep their hold on a top-seven spot. As such, the inference is that goals will come in plenty this game week.

In spite of struggles, Sittard will not go down without a fight. They might not have fared well in terms of results in h2h clashes over the past two decades. But it is quite impressive that the last they failed to find the back of the net at this stadium in an h2h meeting was back in 2000.

The team is quite desperate this Wednesday, and are expected to slot in at least one goal at this ground.

Heerenveen have a superior h2h record against this opponent over the course of the last two decades, and also have been one of the best teams in the league this season. They are one of the contenders to secure qualification for Europe from the Eredivisie this time around.

Meanwhile, Sittard have been totally toothless in 2022. In fact, they have just four wins to their name this whole season, and only two of these wins came at home in the past eight months.

It definitely looks like things are in favour of Heerenveen. A win for them is placed at an odd of 2.40.

Coming to goals though, most of the previous h2h encounters have turned out to be high-scoring affairs. On top of that, Sittard let in two or more goals in all of their games after the World Cup, and their latest clean sheet came three months back.

And in spite of all their domination, Heerenveen have seldom kept clean sheets in h2h clashes. In fact, they have just one to their name at this venue in the past two decades.