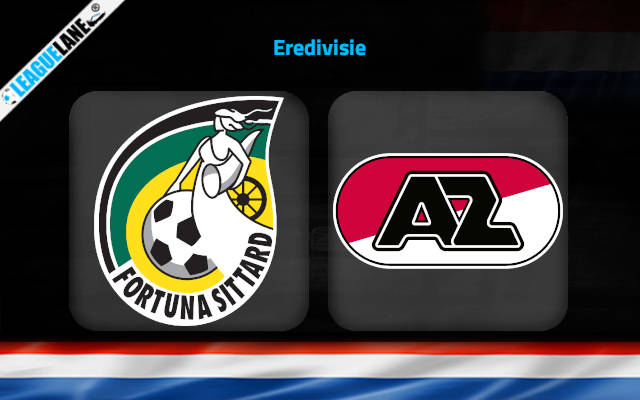 Sittard is devastated at the second last spot on the league marking their 11th loss in the previous fixture. They are currently in the zone for relegation to Eerste Divisie. Alkmaar is far above them in the zone for getting into the Conference League Play offs . They are on an 8 game winning streak back to back with 5 of them happening in the league. To repeat the same, the visitors are set to travel to Fortuna Sittard Stadion this Sunday.

AZ Alkmaar is at the 5th spot on the standing with 32 points from 18 games. They won 10 times in the league while drawing twice and losing on 6 other occasions. They have scored 35 in total while conceding a sum of 23 so far in the league.

Cheeseheads have won 5 games back to back in the league with the latest one being against Groningen by 1-0. They got advanced into the Round of 8 of KNVB Beker after thrashing Heracles by 4-0 in the draw of 16. Last week, they were involved in a Club friendly against Gent which ended in 1-0 in favor of AZ.

On the other side, Sittard resides at the 17th position on the table with only 13 points. Of the 18 matches played, they won only thrice while drawing on 4 and losing on 11 other occasions. Their total goals to conceding ratio is the worst in the league which stands at 19:46.

Fortunas got vanquished in the previous league fixture against Ajax by 0-5 while they drew a Club friendly held last week against 2. Bundesliga’s Schalke by 1-1. Their dreams of KNVB Beker has also got shattered after giving up to the table leaders PSV in the Round of 16.

We expect the same to happen on Sunday as the previous h2hs since the hosts are poor at home and lost the past 3 home fixtures. With the last 10 h2hs unbeaten, AZ are the clear favorites to win over the relegation fighting hosts.