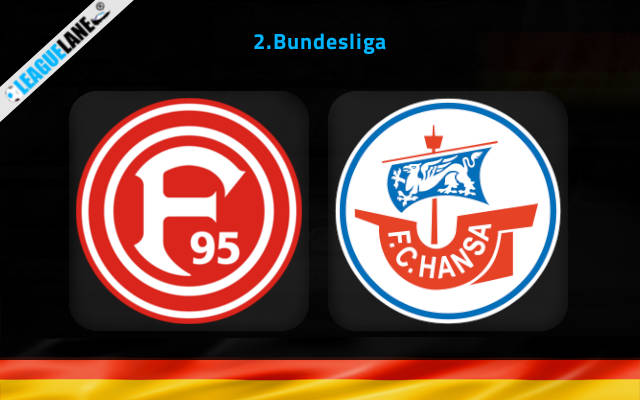 On a 4-game winning streak, Hansa seeks to extend their lead as they meet Fortuna Dusseldorf who drew the last 3 games in a row. The two will face off each other at Merkur Spiel-Arena this Friday.

Hansa is at the 11th spot on the standing with 37 points from 28 games. They won 10 times in the league while drawing on 7 and losing on 11 other occasions. Awesome showcase from Rostock away from home, where they are currently unbeaten in 5 games. But they need some room for improvement in defense.

Hansa Rostock go into this match following a 1-0 league win over St. Pauli in their last outing. Jens Härtel’s men have managed to stick the ball in the net a total of 10 times throughout their previous 6 matches. The aggregate number of goals that have been scored against them during the same equals 8.

On the other side, Dusseldorf resides at the 13th position on the table with only 33 points. Of the 13 matches played, they won only 8 games while drawing on 9 and losing on 11 other occasions. Momentum is really building for them as they have now gone 7 games without losing.

Fortuna Dusseldorf go into this fixture after a 2-2 Bundesliga 2 drawn match over Karlsruhe. It’s possible we will see a couple of goals here, with the last 4 games for them ended with 2 goals or more being scored.

Fortuna Dusseldorf has enjoyed playing at home recently, with the side currently unbeaten in 4 games. But they have not won against Hansa Rostock in their last 2 matches in the league.

Heading into this contest, Hansa haven’t been defeated in their previous 5 league matches away from home. Scoring is not an issue for them when they play away from home. They have scored in the last 5 games they have played on the road.

By the looks of things, expect a tight game ending in a narrow win for the hosts.