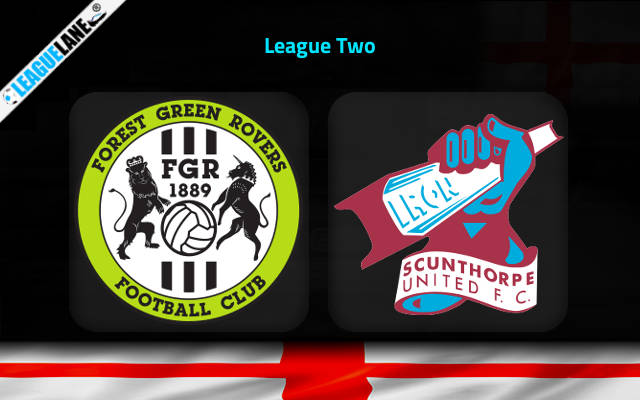 The league leaders, Forest Green will be hosting the rock bottomed Scunthorpe United at The New Lawn, this Saturday for the 40th Round of League Two.

The Green is at top flight in League Two with 72 points from 37 games. They won 20 times in the league while drawing on 12 and losing only 5 times. They have the best attacking front in the league scoring 66 in total. Leading the zone for promotion to League One, they hope to extend their current 4-point lead from the second placed Exeter.

Forest Green Rovers will want to continue from where they left off last time out with a 1-0 league triumph against Colchester United. Under three goals per game were seen in 5 of the last 6 fixtures where they have been participants.

On the other hand, Scunthorpe resides at the rock bottom in the relegation at 24th position on the table with a mere 24 points. Of the 39 matches played, they won only 4 times in the league while drawing 12 times and losing on 23 other occasions. Their total goals to conceding ratio stands at 26:71 which is the worst in the league, showcasing their dreadful lineup.

Scunthorpe marked their 4th consecutive loss previously against Harrogate by 0-3 margin. Their performance has been disappointing as of late, as they have won just 4 of their 54 most recent clashes across all competitions.

Ahead of this meeting, Scunthorpe United have not won away from home in their last 7 league games. They have taken just 5 points from their last 51 available to them in League Two, with only one of those points coming away from home.

Forest Green won 61% of the games played at home this season. In their last 26 games in the league, they have been undefeated on 23 occasions. They have also won the last 3 h2hs in a row.

Taking all these factors into account, we feel that an easy win for Forest Green can be seen this weekend.