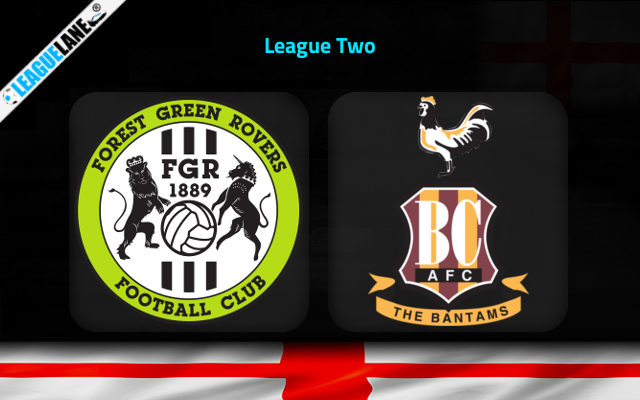 Despite of their recent disappointing form, they still occupies the top spot with a total of 68 points. They are having a difference of 8 points with Northampton who sits second on the table. Forest Green possess the best attacking and defensive lineup in the league. They will be expecting them to deliver a positive display with the harmony in scoring and preventing the opposition from scoring in the coming fixture.

They were last seen playing a 1-1 draw with Salford City. With that draw they are winless since five games. They have been leaking goals lately.

Meanwhile, Bradford City have a dreadful form in the league of late. They have been dropping points in their recent league fixtures. They have a decent attacking side while their defense looks not so impressive. With their current disappointing form they sits 15th on the table.

Bradford City have lost their most recent league fixture against Swindon. With that defeat, they are on the back five subsequent defeats.They will be having lowest of spirits following such a set of negative displays.

By the looks of things, either of these two outfits will be desperate to record a win as they have failed to record one in the past 5 league fixtures.

Forest Green have only lost twice in the past 12 league fixtures at home. They have been scoring goals with ease here. On the other side, Oldham have a seesaw of form on road. They are winless since five league games on road.

Analyzing the above stats, we expect a win for the hosts at the end of this one. We expect goals in good numbers considering the current form of both these outfits.